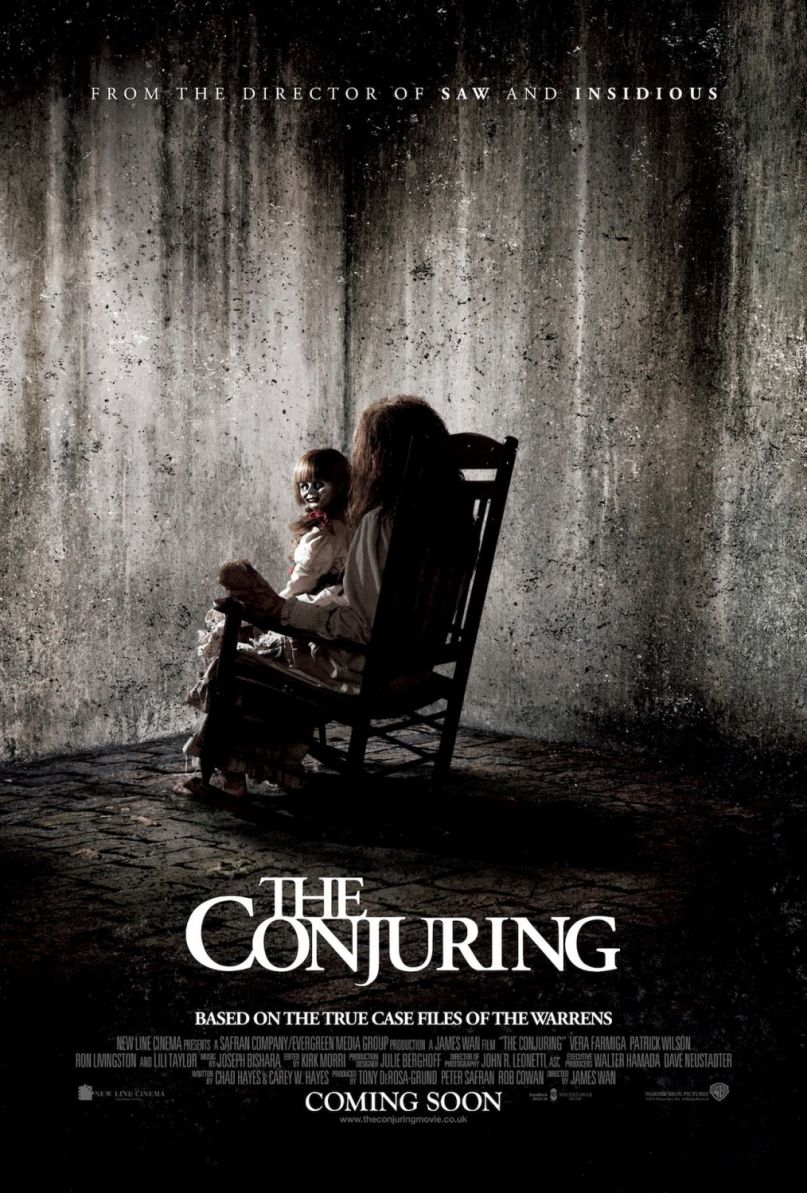 “Based on a true story.” Such a tagline once held weight in the horror genre. Back in the Fall of 1974, when Tobe Hooper’s The Texas Chain Saw Massacreterrorized American audiences, and John Larroquette ominously instructed that what they were about to see was real, nobody could turn to their Wikipedia apps or hit up IMDb shortly after. The horror of the truth laid in the narrator, whose authority was vast and expansive, so that whatever was said on the silver screen had to be real. In today’s post-Blair Witch era, where our market is oversaturated with information and mystery’s been dissolved in a bucket of lye, the truth is questionable (that is, unless it looks like something stripped from Live Leaks or 4Chan.) This explains why every year we’ll see another Paranormal Activity or one more cartridge of short films a la V/H/S. People still want to be frightened, they just need to be convinced it’s believable.

That’s what makes James Wan’s latest haunted house thriller The Conjuring so perplexing. The Saw and Insidious creator dials it down for his latest spooky entry, instead relying on rustic scares previously established by William Friedkin (The Exorcist), Stuart Rosenberg (The Amityville Horror), and Richard Donner (The Omen) and forgotten by directors like himself. Doors creak, objects toss around, voices tease around the corner and fear dwells in the screams of its victims, to a point. Unlike, say, Ti West (The House of the Devil), Wan’s nod to ‘70s filmmaking doesn’t get so in-depth that it feels like an artifact from the era, but rather an improvement on the moldy devices, re-wiring them for modern audiences. Fast cuts, Fincher-like pans and impressive (but not too impressive) effects are sprinkled throughout to spike the nerves and elevate the tension where pea soup and red-filtered flashlights wouldn’t suffice.

But The Conjuring is a true story, more than The Texas Chain Saw Massacre, which took bits and pieces (eh, literally and metaphorically) from Wisconsin’s Ed Gein and shipped ‘em down to The Lone Star State. The story’s simple fare: In 1971, Roger and Carolyn Perron (Ron Livingston and Lili Taylor, respectively) move their five daughters into a rundown farmhouse in Harrisville, Rhode Island where they soon experience many a bump in the night. Parallel to this, we follow paranormal investigators Ed and Lorraine Warren (Patrick Wilson and Vera Farmiga), who decide to help the Perrons and discover it’s a case unlike anything they’ve witnessed before. In other words, we’re talking about major demons, hardcore possessions, and the type of ungodly stains that don’t come out with simple holy water.

It’s the A-list performances that keep The Conjuring ticking until 3:07 a.m.. The always-reliable Livingston (seriously, can we get him in more things?) and the very rare Taylor slip right into their familial roles as if its second nature to them, while Wilson and Farmiga bounce off one another with enough cadence and energy to warrant a second entry in a continued series. Think Mulder and Scully meet Dr. Kinsey and, um, Laura Linney. You know, Kinsey’s wife. Those Perron children do wonders, too, and there’s a particular scene involving an ominous bedroom door in which the girl’s conviction will yank all the hair right off your arms. This is what a ghost story needs to be.

Though, if you’re going to make a story about spectres, even if it’s a found footage tale, there’s one simple rule: You have to go as long as possible without showing them. One of the minor flaws with The Conjuring is that it offers reveals in awkward situations. And unlike Samara in The Ring or Linda Blair’s spinning head in The Exorcist, what’s behind the curtain isn’t all that compelling. In fact, their Halloween Horror Nights-inspired demeanor contradicts the smudged tones and throwback nature of the film; they’re too doctored up, leaving much to stick out like Marty McFly’s dorky life preserver in 1955. Again, it’s not too much of a detriment, as the reveals are sparse and few, and once the true demon awakens by the fourth act…well, let’s just say Evil Dead isn’t the only thing that gets the damned right in 2013.

Slight issues aside, The Conjuring materializes as the sort of horror flick you once whispered about in the schoolyard. It haunts long after the spooky end credits saunter by and bleeds with the same terrifying malaise as those eternal, inconclusive episodes of Sightings. And while so much of it feels familiar, it’s proof that old tricks never rust, like visiting a funhouse at the state fair and immediately realizing how unsettling they are no matter the age or time of day. More importantly, it’s solid evidence that it doesn’t take a shaky camera and some off-the-cuff storyline to terrify the YouTube generation and make believers out of them. Here’s your head start, though: Google “Ed and Lorraine Warren.”