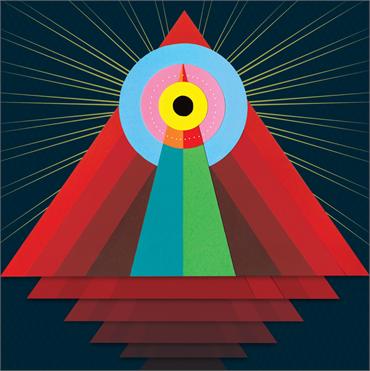 Fever Forms kicks into gear quickly, the one-two punch of “The Falls” and ”Pyramid Kosmos” opening on a frenetic high. The former relies on a shuffling beat, syncopated guitar, and chanted vocals, an arena pop song without lyrics or a hook, but with random bursts of twinkling electronics. “Pyramid Kosmos” embraces the mystery of its title, twitchy synth lines locking in and out of pace for five minutes, its thick layers rising up to dissipate at a single point in the sky.

The album’s singles, logically, come together in more traditional structures. Yvonne Lambert’s sateen vocals lead “Whitby” as she dives off a Stereolab-ready board of choppy samples and a clap-along beat. Later, “Sharpteeth” smooths over much of the weirdness, overdriven guitar, and group vocals that recall Los Campesinos! (but with a theremin thrown in—this is The Octopus Project, after all).

Other than the sub-minute interlude of “Unspool” and late-album ballad “Perhap”, Fever Forms keeps the energy high and tight, staring directly at the sun while dancing around manically. The saw-wave synth of “The Man With The Golden Hand” zips and careens, pushing things in and out of focus, but delightfully bright guitar riffs keep everything hooked together. The cutesy noir daubing to “Death Graduates” is a nice touch, chiming glockenspiel and handclaps keeping things light despite the despairing, minor key “oh no”s.

The Octopus Project pushed farther than they ever had on their last record, and in a sense, Fever Forms is a step closer to their comfort zone. That said, the comfort zone for a band like this is a weird, wonderful place.