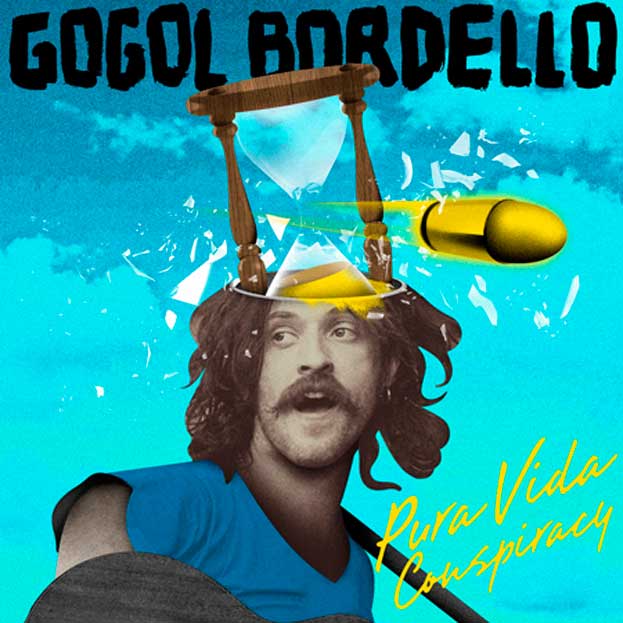 Well shucks, Gogol Bordello has done it again: Pura Vida Conspiracy, the gypsy troupe’s sixth studio album, is one more contagious collection of anthemic songs about lost love, freedom, oppression, and death. To date, they’ve strived to form a connection between cultures either through their ethnic roots or foreign dialect, but now there’s a softer side to Bordello, one that bypasses face-palming facts and ruminates on life’s brevity and the importance of change.

It’s a reinvention of sound for Eugene HÃ¼tz and crew, featuring everything from sonic-speed polkas to tender, soul-searching melodies. Pura Vida Conspiracy isn’t jam-packed with dynamic, heart-pounding, face-smashing, bar-brawling tunes like its predecessors, but it might be the band’s best collection of sounds yet. It inks the true spirit of Bordello to the front page and doesn’t disguise their inherent purpose of world integration behind exclusively fast-paced melodies.

From booze-punk opener “We Rise Again” to the fever pitch mandolin on “Dig Deep Enough”, everything’s in a constant state of motion (and emotion), as HÃ¼tz exorcises his soul in a way that turns the band into some kind of magmatic ooze. The jazzy, flute-laced “Rainbow” and the sexy Spanish flair of “I Just Realized” remind listeners of life’s remarkable simplicities and yet still push towards a greater goal of elevating hopes and instilling dreams of revolution.

Pura Vida Conspiracy hops the globe from Latvian table-thumping, to Jamaican beach melodies, to bass-drenched punk rock parrandas, instilling thoughts of raucous circus parades along the way. Essentially, it’s a giant, stomach-ripping burrito that will leave you disgustingly full, and yet still excited for dessert. Although in this case, dessert comes in the form a two-minute hidden track full of heavy metal guitar and the story of an Argentinean girl and her jealous sister. It’s unexpected to say the least.

Frantic and poetic, Pura Vida Conspiracy is another open window into gypsy culture that, for reasons unbeknownst to us, feels and looks like home. No need to knock, just climb in.