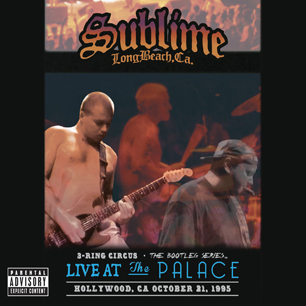 October 21, 1995 was a historic moment, though its participants may not have known it. Less than a year before Sublime would release their seminal self-titled record, the band rocked a sellout crowd at Hollywood’s the Palace. Seven months later, lead singer Bradley Nowell was dead of an overdose, ending the band just before Sublime exploded onto the charts. Now, after the band’s storied and prematurely stunted career — after their breakout album helped shape the sound of the ‘90s, and their consequent breakup and reunion with a replacement singer — 25 years after Sublime’s first show comes their first official recorded concert, 3-Ring Circus: Live at The Palace—October 21, 1995.

The 78-minute, 27-song setlist features a comprehensive slice of Sublime’s early catalogue, including classics like “Badfish”, “40 Oz To Freedom”, and “Greatest Hits”. “Don’t Push” is split in half to bookend a lazily confident “Garden Grove”. The band tears through several stretches without pause, running Toots & the Maytals cover “54-46 That’s My Number” straight into “Date Rape”, the latter of which pauses partway through because “Eric [Wilson] broke a bass string, hold on.”

The beats on many tracks are slower and fatter than the recorded versions, which is a mixed blessing. It’s novel to hear the songs embellished, but for those who grew up on the recordings alone, the exchange robs the live tracks of their energy in places. “We’re Only Gonna Die For Our Arrogance” still rocks hard on its uptempo sections, but they’re such a marked contrast from the fat reggae beats of the intro that they jangle nervously in places, Nowell’s voice fading into the mix, rather than the masterful, controlled burn on the album. Similarly, Nowell’s flat delivery on “Right Back” robs the strategic pauses of their comedic value.

But however casual or sloppy they sometimes appear, the band’s irrepressible talent shines through. A “super turbo version” of Bad Brains track “House of Suffering” is among the band’s best efforts in any setting. Bud Gaugh’s bullet-fast drumsticks and an ominous guitar rip through the track in truly mindblowing fashion — and then the band slides casually into the heavy dub of “DJs”, as if nothing special happened. “Saw Red” displays Nowell’s spitfire vocal abilities over a cheerful ska beat that morphs into a blistering hard rock chorus.

The promised “on-stage antics” of the press release are less audacious than you’d think. One notable moment sees Nowell use the pause in “Date Rape” to solicit roadies: “Right after the show, I want all the volunteers, you can go on the road — you gotta be willing to quit your job for about a month, and we’re leaving in four days… You gotta like dogs, too.” Of greater interest is the stage banter, like Nowell checking in with his bandmates (“Alright, ‘early man’?”, before opening “Arrogance”) or getting the crowd to chant his dog’s name. Nowell flubs the lyrics on “Date Rape” — one of the band’s most popular songs — but the song’s momentum will not be denied, and by the shouted final “she didn’t want to take it!”, he’s sold it anyway.

“We’re gonna try another new one… I ain’t got any lyrics either, so I’m gonna fucking fake it,” Nowell confides cheerfully about halfway through the disc. For the modern listener, anticipation transforms into incredulity as the song begins: the distinctive opening bars of now-classic “Caress Me Down”. Whether the song was then unfinished or Nowell simply forgot the words, the song sadly lacks its “Mucho gusto/ me llamo Bradley” opening line, and it relies on the infamous “mushroom tip” verse in place of many of the others. The full studio take is a masterpiece of clever perversion and is, without question, the superior version. But there’s a certain charm to hearing the rough draft with knowledge of where the song will go.

In reality, few if any of the songs sound better here than they do in studio, but it’s the novelty factor that drives 3-Ring Circus, like the little lyrical tweaks in “Don’t Push” or Nowell letting the audience sing certain lines. After a rough moment in “Crazy Fool”, Nowell apologizes to the crowd: “Thanks for bearing with us… We’ll see you here next year. We’ll have it right then,” a gut-punching irony that interrupts the party and quietly inhabits the record. The Palace show sounds like it was fun, but more importantly, fun that a lot of us never got to experience in person. Not to mention the fact that the band producing that fun was on the cusp of becoming one of the most influential bands of the ‘90s and never got to fully enjoy the climax of their success. For collectors, for hardcore Sublime fans—for anyone who wishes they could’ve been there—3-Ring Circus is an archaeological treasure.