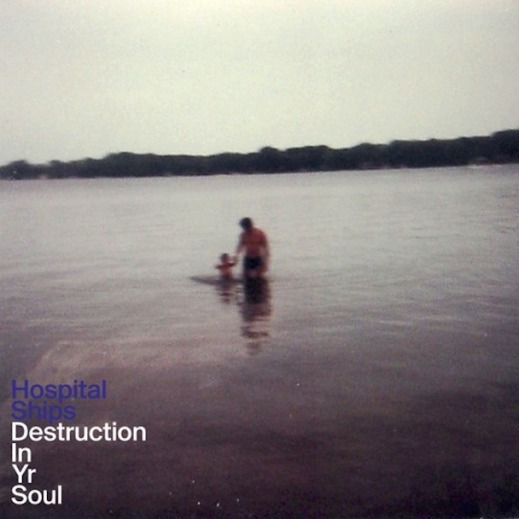 For every band like Sun Angle, who deftly weave the dichotomous sounds of punk and tropical, there are bands like Hospital Ships. Formerly the bedroom project of Kansas’ Jordan Geiger, their incongruous mix of satiny folk-rock and jagged garage rock should, theoretically, flourish. But as Destruction In Yr Soul demonstrates, their balancing act is far too disjointed to be successful.

The LP is composed primarily of harmless songs like “Lost Folk Song”. Here, a solid folk core (strummy guitars, sensitive emotional content complete with “ooh and aah” vocals) is embellished with bits of noise. It won’t offend anyone, but there’s an artificiality abounding that won’t exactly set listeners ablaze, either.

What’s intriguing is that the formula’s so close to being utterly profound. With “All Yr Gold”, the harder elements are there, but they’re given less preference, leaving the gentle pacing and sense of calm to develop naturally. It’s not a quiet folk song, as there are weird shouting parts and slight hazy effects milling about, but their minimalism enhances the overall serenity.

The record starts going awry with denser numbers like “Servants” and “Remaining Light”. The former is like the guitarist is building a psych jam, while the bassist tries to play “Under Pressure”, and the drummer’s slamming a cheap-o MPC. Almost inversely from “All Yr Gold”, “Remaining Light” features more mechanized drumming and an insistent, yet barely there ambient haze, an addition which ruins an otherwise gentle, romantic folk tune. These prove that when their equation fails, it does so splendidly.

Still, the approach is understandable, considering that Geiger’s evocative vocals could easily handle any genre. On “Come Back To Life”, his wail under the barrage of cymbal crashes and guitar dissonance sounds pure and unstoppable. In “Desolation Waltz”, his pitchy, robotic vocals even manage to steal the spotlight from the aural onslaught. And when he gets super romantic on the uber garage-y “If It Speaks”, he makes that scene feel newly authentic and fresh. Sadly, he and his bandmates can’t regularly maintain this balance, leaving us with the mess.

Essential Tracks: “All Yr Gold”, “If It Speaks”