Empire of the Sun – Ice on the Dune 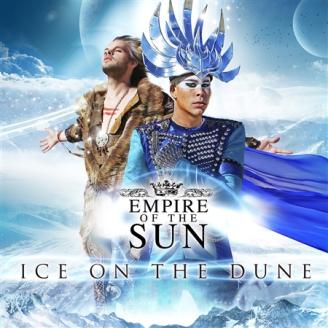 The year 2013 is basically the party that the Aussie glam-wizards of Empire of the Sun traveled light years to DJ: David Bowie released his first album in 10 years, Pet Shop Boys are going on tour, and Australia was empirically named the “happiest place on earth.” But now that they’re back, it seems all they want to do is escape. Judging by their New Wave-influenced sophomore release, the duo’s getaway vehicle of choice is a DeLorean and the destination is “A meadow where we lie back in the spring of 1979” (“DNA”). Time to go, Doc.

Vocalist Luke Steele and co-writer Nick Littlemore comprise the otherworldly electro pop band. Their 2008 debut, Walking On A Dream, was a portrait of Steele’s declamatory disco vibes fashioned in science fiction-meets-Zelda mythology. That album emerged stateside  during indie music’s fixation on foggy fantasies and face paint a la MGMT’s Oracular Spectacular and Grizzly Bear’s Veckatimest. While those artists eclipsed the Empire, Dream hung on as a cult favorite in America while it dominated abroad: double platinum in Australia and gold in Ireland, Germany, and the U.K.

Diehard fans will identify Ice on the Dune as more loyal to Littlemore’s band Pnau than to Steele’s alt-rock band The Sleepy Jackson. Pnau (rhymes with “meow”) is like the Glee form of Empire of the Sun: big, embellished ballads and a helping hand from Elton John. Dune follows in Pnau’s lush production style. The aim is: “surrender to the beat”, which would be fine and good, except nobody ever agreed to surrender Steele’s awesomely flamboyant voice in the process.

First single “Alive” strikes a balance with roller-rink escapism and a schoolyard chorus that’s reminiscent of the gone-too-soon band Black Kids. The song itself doesn’t quite ‘win’ until you see the video, which is how Duran Duran existed for years. Steele dons a long Etruscan cape like The Little Prince at Studio 54 while an Amazonian/desert woman darts from sight. Her name might as well be Rio with the way she dances on the sand. All that is merely a tease at Dune’s grandiose offerings of 1980s New Wave. The album’s preamble (“Lux”) arrives with a cinematic marching band, appreciated by the handful of people who still pre-game to Pet Shop Boys’ “Go West”. But it all irks Steele, who whines “I don’t wanna be so complicated” (“Concert Pitch”) in a dance-floor tantrum inspired by the many Neil Tennant had himself.

Dune offers plenty of accessible, danceable fun. It’s neither better nor worse than Dream, but for all that talk of “pushing through four dimensions” (“Surround Sound”), the album remains planted in its comfort zone. There are moments to love: the many ways Steele pronounces the word “awakening”, his fractured shrieks (“Celebrate”), and a spin on the old electric harpsichord (“Old Flavours”). I can’t decide whether the best part of “I’ll Be Around” is the lute solo or the bridge of groans. If this is what space travel is like, it’s possible Eddie Money’s music was engineered by NASA.

Despite all the digital acrobatics, the standout is closer “Keep A Watch”, an anti-gravity slow jam where Steele steps beyond his synthesizer (not really), bringing unexpected emotions to the table. It instantly conjures Bowie’s haunting flamenco, “Lady Grinning Soul”, also the last track on the iconic 1973 album, Aladdin Sane. But forty years ago, evocation was just as bizarre for the star man as it is today for Empire of the Sun. Makes you wonder what the Empire might accomplish with a touch of that old time, ground-controlled rock n’ roll.