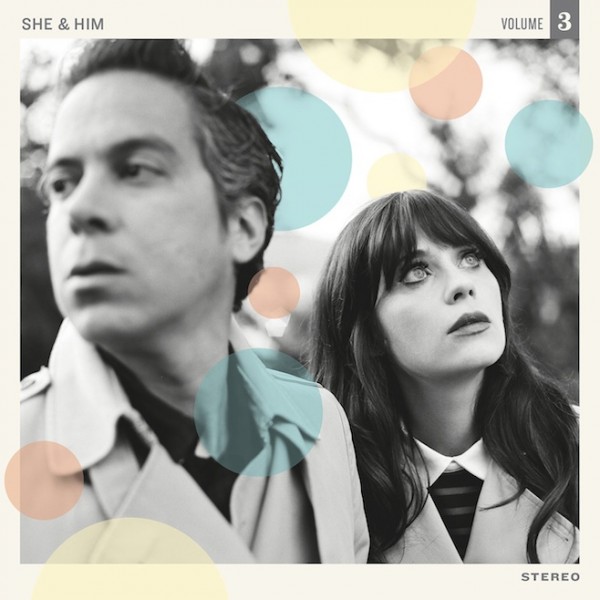 Over the last week, She and Him’s breezy, sunny, retro-pop Volume 3 did something special for a Merge Records album: it beat out the Jay-Z executive-produced The Great Gatsby soundtrack to emerge as the #1 release of the week, on both iTunes and Amazon. The duo of Zooey Deschanel and M. Ward has consistently risen through the charts across their seven-year partnership, and they are finally emerging on top, with the release of their third collection of original songs (and three covers), their most effortless and fully realized songs yet.

The focus has always been more on the She rather than the Him, as Deschanel — also a star in the world of film and television — once again shoulders the main singer-songwriter duties. The initial surge of this album seems to answer the question that all the haters want to foist on the 33-year-old, publicly perceived as unspeakably quirky, sweet, and shy: Is it even possible to dislike her? Her persona as an actress and throughout the She and Him catalog has exuded an awkward awareness of her own status. So why hate on an artist whose very self-awareness undercuts the overly nice image thrown at us? She’s a 21st century archetype, at once too good to be true and just perceptive and prickly enough with that place in culture to make it genuine. She’s so likable because she’s one of the first to let us know how weird it is to be liked.

But as she’s grown more comfortable in her own skin, and finally sounding relaxed as a singer on Volume 3, she’s making broader, stronger claims on her generation of ambivalence. This position can be extrapolated through the pre-chorus of “Never Wanted Your Love”: “I’m not talking to you anymore / I’m making my bed so I can lie there forever / I don’t know what I’m doing this for / all I know is that I’m tired of being clever / everyone’s clever these days,” she sings through Ward’s arrangements of shimmering strings, bright guitars, and chugging toms, lying somewhere between florid, early Britpop, his solo work, The Crystals, and Jackie Wilson cuts.

Despite the summery feel of Ward’s arrangements, there’s a significant amount of sunburned emotion throughout Volume 3. You can certainly think that these songs, the ones about loss and heartbreak anyway, are about Deschanel’s divorce from Death Cab For Cutie’s Ben Gibbard in 2011 — this is the first She and Him record since then. “Shadow of Love” is a dark ballad, where love crashes because “we couldn’t see around the bend.” On “Turn to White”, she’s better for having passed through the struggle of heartbreak: “I’m stronger than the picture that you took before you left,” she sings. This is her album, a collection of images that have nothing to do with how others view her. She’s stronger having realized a new vision of herself.

Even so, there isn’t a real narrative or much specificity to grasp on to. Instead, these songs become affirmations of personal strength and resilience that can commiserate with anyone who’s suffered pain. It helps that most of the album deals with more celebratory topics. Pair that with the expertly harmonic production of Ward and Volume 3 is almost too comfortable to listen to. It doesn’t inspire sadness or regret or much introspection at all. Instead, the overriding feeling is that tomorrow will always be a better day — that’s totally fine.

While Deschanel’s songwriting is classically strong, the performances spot-on, and the arrangements undeniably impressive, She and Him don’t offer much of an update to this classic sound. There are other groups out there, like Lady or Rhye, offering something more fascinating in terms of skewing the ’60s pop, R&B, or doo-wop formulas, but She and Him stick by well-established benchmarks. By mark of sales, that’s apparently what audiences want — as a mass, we’re still embracing the thick productions and broader ideologies of pop songs past. While Deschanel seems interested in offering more, even if that means not being clever, that’s clearly the best way to make a large splash.

Essential Tracks: “Together”, “Never Wanted Your Love”, and “Turn to White”