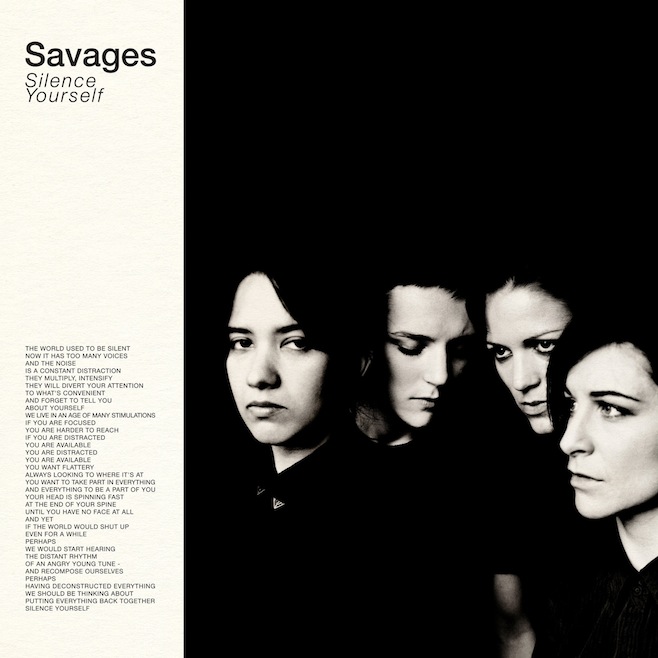 “We live in an age of many stimulations,” proclaims frontwoman Jehnny Beth in the introduction to Savages‘ video for “Shut Up“. “You want to take part in everything, and everything to be a part of you. Your head is spinning fast at the end of your spine until you have no face at all.” The erosion of identity through overstimulation isn’t a new concern in post-Internet culture, but rarely is it so explicitly criticized by musicians. Signs taped up at Savages shows read, ”Our goal is to discover better ways of living and experiencing music. We believe that the use of phones to film and take pictures during a gig prevents all of us from totally immersing ourselves. Let’s make this evening special. Silence your phones.” Beneath an avalanche of information, Savages want us to sit still and listen.

It’s difficult to imagine enjoying a Savages set through an iPhone screen. Rather than dispersing home demos through a network of blogs, Jehnny Beth, Gemma Thompson, Ayse Hassan, and Fay Milton built their band the old-fashioned way: through performances that were impossible not to talk about. Savages demand attention by restraining their physicality while the music boils over. Beth helms the stage with a presence that seems learned equally from Ian Curtis and Lisbeth Salander, while her three bandmates bow their heads to train all energy on their instruments.

That musicianship cuts Savages apart. Since its 21st century rebirth, post-punk has taken many shapes, from wide and gloomy to choppy and fun. Rarely has it manifested this kind of ferocity. Recorded live in the studio rather than piecemeal, Savages’ debut album Silence Yourself sees the band completely locked in with each other. Milton’s steady command of the kit feeds Hassan’s tumbling bass lines, while Thompson wields distortion with a range that suggests influences as far strewn as Larry LaLonde and Isaac Brock. Beth’s accented yelps dart through post-punk heritage, taking cues from David Byrne and PJ Harvey alike.

The members of Savages don’t identify as feminists, but like riot grrrl, they subvert a space that has historically been used to communicate male desire. Beth’s lyrics bounce between violence and sex, tearing down myths of domesticity and romance in their path. She acknowledges the human need for affection, but lashes out at the masks we hide affection behind. On “City’s Full”, Beth sets signs of physical decay (stretch marks and wrinkles) in contrast to “sissy pretty love”. Real love, she suggests, is not shallow — it’s turned on by the ways our bodies roll through time. “Strife” lauds sexual inhibition and kink as key to long-term commitment; Beth has been with boyfriend and collaborator Nicolas Congé, who performs as Johnny Hostile, since she was a teenager. Unlike Ian Curtis, who also paired off young, Beth sings to the strength of her bond rather than its shortcomings. In a culture that tends to foster loneliness and need, just sticking together can be an act of rebellion.

Silence Yourself marks substantial growth from Savages’ debut single “Flying to Berlin“, which grafted a goth skin onto Joy Division muscle. The tension between instruments pilots the record from squall to squall as the band navigate post-punk’s history without trepidation. Unlike some retro-leaning bands that spill over with their own influence, Savages carefully select their sound rather than simply accumulate it. Silence Yourself smears together three decades of post-punk, then pares it all down to the bone.

Savages’ observations on our narcissistic culture seem astute, but how can the London foursome fight against the social anemia it diagnoses? Can it cure our disease of distraction? The perpetual pressure to distinguish ourselves may actually melt our identities, as Beth posits in “No Face”. We want to please others — not just those we interact with daily, but suddenly millions of strangers on the Internet, too. Our expanded daily audience whittles us down, but is the answer just to turn off our phones at concerts?

Savages champion essential qualities of music that are too often washed away by the Internet’s slipstream: presence, performance, togetherness, transcendence. Members of the band give clipped interviews because the music is not about them. It’s a collective experience that they only spark. ”The world used to be silent. Now it has too many voices,” reads the manifesto on the cover of Silence Yourself. “The noise is a constant distraction.” The album’s titular command doesn’t tell us to quiet down so we can hear the music. It wants us to shut up so we can hear ourselves. Our constant chatter drowns out our own wants, thoughts, hopes, and connections. We’re so busy broadcasting ourselves we’ve forgotten how to know ourselves. Savages clear the air. Silence yourself and listen.