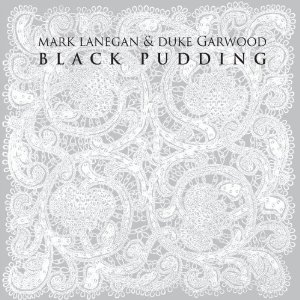 The whiskey, blood, and holy water from last year’s estimable Blues Funeral had barely dried up when Mark Lanegan partnered with English bluesman Duke Garwood to record Black Pudding, an album that crawls, breathes, and refurbishes the acoustic blues of Lanegan’s early solo work. Here, as the shared billing suggests, Lanegan’s rugged voice and Garwood’s delicate playing intend to speak to each other. Only part of the time, though, do the two seem to be participating in the same conversation.

The trouble with Black Pudding becomes finding exactly where these two singular voices should meet. The album’s most rewarding interactions come when the duo endeavors to do more than simply swap parts. Garwood’s Eastern-sounding instrumentation swells beautifully beneath Lanegan’s end-of-verse croon on the slow-burning “Mescalito”. “Cold Molly” takes the same beat in a funk direction, Lanegan’s swagger and loose delivery adding to the vibe created by Garwood’s digital-sounding guitar work. And the hushed “Sphinx” intermingles pond-ripple vocals and guitar droplets to create a mystical vapor.

Just as often, however, the two accomplish little more than coexistence. On “Driver”, Lanegan’s interspersed declarations and humming come across as mere placeholders or, worse yet, interruptions. In other moments, what Lanegan and Garwood are doing individually seems far more interesting than the result of the joint effort. The discordant “Thank You” buzzes and plunks alongside Lanegan’s singing; the result is the feeling of listening in on two conversations at once and having no idea what either one is about.

Black Pudding spins like a promising duo still learning how to share space with each other. It’s a less appealing debut than Lanegan’s first records with, say, Isobel Campbell or Soulsavers, and a challenging introduction to American audiences for the talented Garwood.