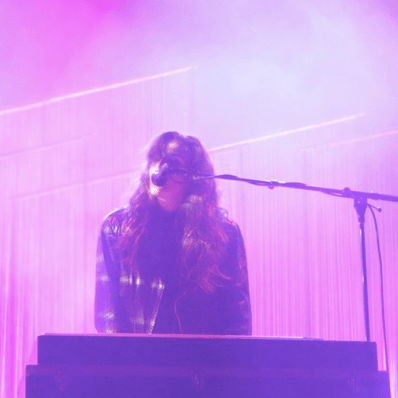 Anyone who still thinks Beach House is boring hasnt seen how Victoria Legrand whips her hair back and forth like Kirk Hammett in sequins. Last Friday night in Baltimore, she commanded the stage with potency her hometown had never seen. Its been three long, Beach House-less years for Charm City. But while the dream-pop duo were jetting around the world, headlining festivals, playing Letterman, and becoming so big that Jay-Z and Beyonce publicly groove to their music, they became something no one quite expected: professionals.

Seeing Baltimores DIY crowd permeate the Lyric Opera House was a bit like that scene in Cry-Baby when the tantalizing drape played by Johnny Depp goes to the talent show in the square part of town. Of course, it was also like that scene because the director John Waters was actually at the show.

Some dude in the balcony shouted, Weve missed you Beach House! and even though theres always some dude shouting something like that from a balcony, this time it really was true. Perhaps thats why Beach House began with Teen Dreams Walking In The Park to remind us the evening was fated to happen, all in a Matter of the time.

Before the show, everyone was chattering about Yo La Tengo being the openers and after the show, everyone forgot they played at all. Its partly because YLTs brief set went heavy on Fade, their new album, which sounded flat without the fine orchestrations. Cornelia and Jane is a quaint beauty thanks to vocals by the multi-talented Georgia Hubley and was similar to the Sandy Denny cover they closed with (By The Time It Gets Dark). Regardless, its never dull beholding Ira Kaplans unique jamming style, where he yo-yos up and down with his guitar, struggling as if its a bag of heavy rocks.

Later in 2013, the Hoboken indie vets are bringing Lower Dens on tour in support of Fade. Lower Dens, who kicked off the night, is a hypnotic, krautrock-inspired quartet led by the curious frontwoman, Jana Hunter. The Texas native diversified the Baltimore music scene as Beach House or Dan Deacon, albeit quietly and in gushes of reverb. Onstage, Hunter goes to work conducting the band rather than working  the crowd. They played Brains, the excellent single from their 2012 breakthrough, Nootropics, as well as the percussive Hours by Arthur Bates.

Beach House wafted onstage in a cloud of fog and played almost everything from their two blockbuster albums, 2010’s  breakout  Teen Dream and 2012s even better follow up Bloom. The sorrowful keening of Norway blossomed into the playful wash of Lazuli, which painted the theater a brilliant cerulean. Guitarist Alex Scally crafts the light shows like a visual accompaniment for the set list. The visual drives home the subtle juxtapositions in Beach Houses music as the light alternates occasionally from ethereal silhouettes to seizure-inducing flash attacks.

Most Beach House songs are designed a bit like a wolf in sheeps clothing, with the jangling major chord keys front, center, and full volume, and Scallys dense guitar arrangements coiling beneath that sound. With the Opera Houses acoustics, those layers are mind-blowing, most notable on Wishes and Myth. Scally stood out on the Bloom cuts like On The Sea and The Hours.

Legrand looked like badass constellation in her leather jacket and glittering dress, which matched the wall of stars (like the cover of Bloom). Its impossible to decide whether I prefer her belting the lyrics of Silver Soul or her Morrissey-esque pronunciation of the word Gila. She has a distinctive voice that can weather a storm, but at times, the combination of her homey pitch and slight nasal tone make her sound like a very stoned Brenda Lee.

Lyrically, she has more in common with Ronnie Spector. Simplistic rhymes and murky implications abound in her poetry, like on Wild: My mother said to me that I would get in trouble / Our father wont come home, cause he is seeing double. Its a classic girl group trope, coupled with the thin veneer of glitter and hopeless stars. Beach House are masters of transposing musical and cultural elements of 50s and 60s-era doo wop, which has a rich history in Baltimore if you couldnt gather that from the beehive wigs that are sold in most tourist shops in the city.

Teen Dreams Take Care was a sweet deep cut to include toward the end with its lilting lines and harpsichord. Ill take care of you/If you ask me to, sings Legrand. Baltimore would like to get that in writing, Beach House.

Between the spectacular lights shows and the thundering drums, every song felt like a victory. Sure, it was a major homecoming for a beloved band. But anyone in attendance knows something no one expected: it was no indie show. Their monolithic presence, the studied musicianship, the production values, the anthemic sounds  Beach House aligned more with U2 than Yo La Tengo, hands down. Given the potential, humility, and drive expressed during their performance, theres no telling how far or in what direction they may go.