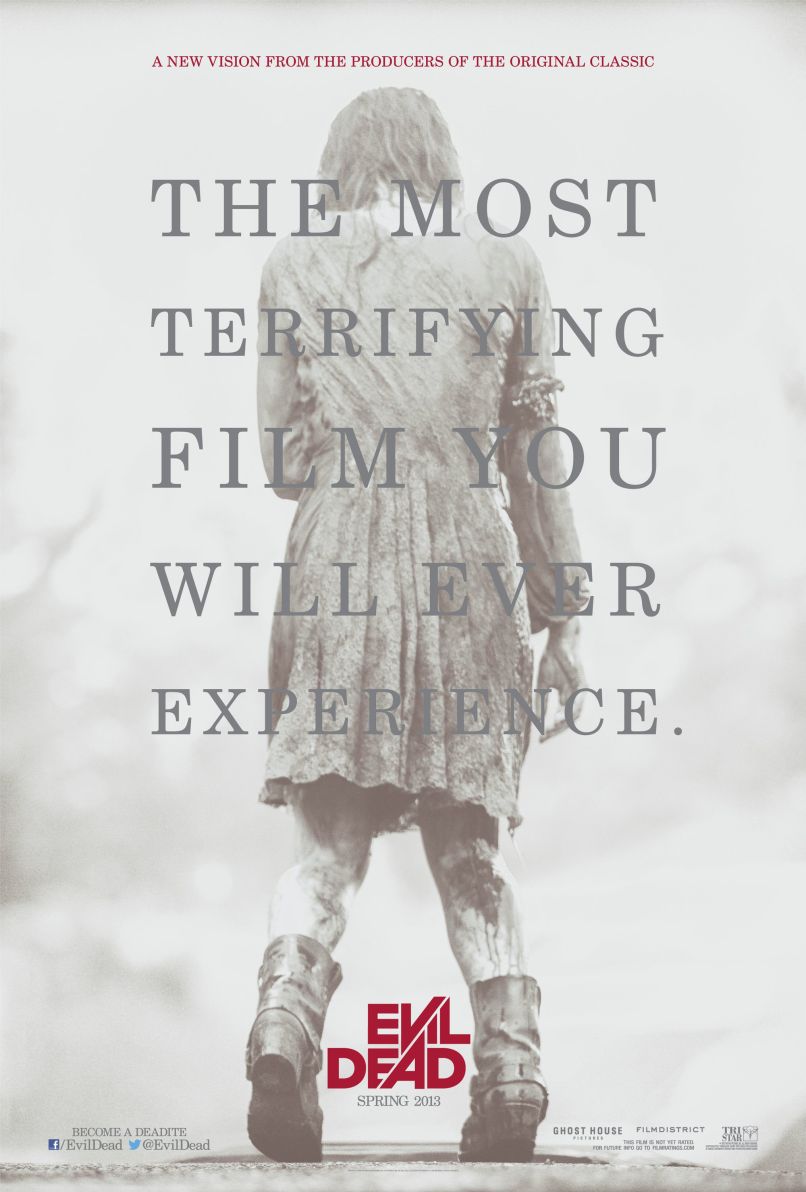 I sat through five trailers of upcoming horror movies. Five. Not one of them looked promising. They all stumbled in repetition over asinine premises, polished thrills, and confused A-listers giving the genre a swing. (No lie: There’s a forthcoming Ethan Hawke-led vehicle set in a future America, where all crime is legal for 12 hours, and there’s not a hint of wit or irony a la Verhoeven.) It actually turned me on for simplicity, like, say, a little ghost story about a cabin, some kids, and a devilish book. You’ve heard of this one before, right? The Evil Dead?

The idea of remaking Sam Raimi’s 1981 low-budget gem of a VHS rental seemed unfathomable. For obvious reasons, it’s forever Bruce Campbell’s film. His cult anti-hero Ashley Williams has long been championed by millions of fans, a population that possesses more by the year with five haunting words: “You have to see this.” What’s more, there’s this nostalgic charm to Raimi’s quirky style of filmmaking; from the quick cuts to the old Hollywood stunts, the tongue-in-cheek gore to the clever sleight of hand.

And yeah, no one could replace Campbell. Say it three more times.

That’s why director Fede Alvarez doesn’t try to with his remake, the slightly shortened Evil Dead. Sure, the premise remains the same (five kids escape to a remote cabin, where they yank an angry arsenal of demons out of a just-found Book of the Dead) but rather than dusted off old tricks, he used a rusty can of WD-40 to grease the engine back to life. In other words, he tweaked the goods.

Not without help, though. What really saves Evil Dead from becoming a future $2.99 Blu-Ray grab in the Best Buy bargain bin, where such “classics” as The Amityville Horror (2005), The Omen (2006), and Friday the 13th (2009) slumber, is the clever plotting by Alvarez and co-screenwriter Diablo Cody. Now, the original’s connect-the-dots premise offers plenty of plug ‘n’ play, namely because its simplicity catered to the film’s overall dynamic. However, that’s what Alvarez and Cody capitalize on: they introduce purpose.

This isn’t a spoiler, so don’t reach for the chainsaw, but the film’s principal character, Mia (Jane Levy), is a recovering heroin addict. The trip to their family’s rustic, battered, carcass-smelling cabin is her detox, which has been arranged by her brother David (Shiloh Fernandez), his new flame Natalie (Elizabeth Blackmore), their longtime friend Eric (Lou Taylor Pucci), and his girlfriend/nurse-in-practice Olivia (Jessica Lucas).

Pop quiz: Based strictly on the original (before we learned of a glorious store named S-Mart), name the profession of one of the film’s characters. Don’t slap yourself around thinking too hard, folks.

Point is, there’s depth to this remake, and it doesn’t involve an unmasking of the boogeyman, but rather a fleshed-out premise that, gasp!, creates tension. In the original, shit went down and everyone became believers within minutes. This time around, there’s this lingering doubt towards the demonic forces, which casts a dark shadow unnerving in its humanity. It plays with your emotions, which is what good horror should do. And in a startling twist, not once does it come at the sacrifice of mystery. All bets are off on the macabre, which was the formula Raimi seemingly championed.

Alvarez does too. The film’s cold open sizzles the nerves, only to toggle the burners up more and more. It’s a bloody and shocking film in the same way the original was (and in many ways still is). The gore is at a maximum high, which should satiate the former regulars of Spencer’s Gifts, and yet also downright clever. Granted, many of the scenarios are stripped from the past (ahem, don’t stand too close to the trees), but evil takes many unexpected turns, made all the more realistic due to Alvarez’ beyond respectable hesitation to use any CGI.

But one cannot forget Levy. If Raimi had Campbell, then start screaming “groovy” towards Alvarez’ star. The Suburgatory actress eschews the backpacks and teen drama for Exacto knives and jagged flesh. As a result, she exorcises one ballsy performance that turns this film on its head and kicks it again and again with blood-stained boots. I wouldn’t be surprised if critics down the road consider this her breakthrough role. As for the rest of the cast, the only other admirable performance is from Pucci, whose character (even if he’s a tad flawed) is worth championing. The others do the horror thing, but even that works out.

Sigh, if this does, indeed, become a new trilogy–wonderful. It’s uncertain where they’ll go from here, and it’s doubtful they’ll send the film’s hero to the Middle Ages, but there’s so much promise left in the woodshed with this Evil Dead. Uh huh, that’s a depressing idea to stomach this day and age: that a remake could be better than something original. But hey, it worked for Cronenberg years ago (Netflix The Fly for proof) and if there’s one thing The Book of the Dead teaches us, it’s that history repeats itself.

Alright, who wants some?

P.S. Fanboys and girls, don’t leave the theater during the credits and, yes, hold on to your souls.