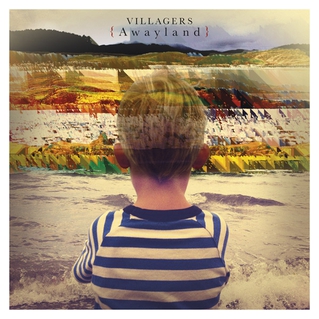 Conor O’Brien started out under the solo moniker Villagers, but his company has grown of late. On his sophomore effort, {Awayland}, the singer-songwriter captures the prismatic beauty of collaborating amongst multiple perspectives and talents and the enviable return of a sound that’s both contagious and rich.

Blame this sound on synthesizers, drum machines, and samplers. As he told The Telegraph earlier this year, a creatively-starved O’Brien bought these alien instruments to tinker around with, an experiment that lead to a new spin on his style: “Slowly words started appearing out of all these ambient soundscapes I was making and then I picked up the acoustic again and learnt how to finger pick properly. The whole album is really a by-product of that steep learning curve.”

Such context explains songs like “My Lighthouse” and “Grateful Song”, and how both cue nostalgia for his earlier work through acoustic guitar resonance and glowing vocal harmonies. His song structures pivot through unexpected twists and turns as instruments combat against each other to create an unlikely ambiance. Horn ensembles, strings, and electronic beats animate the music, granting emotion to the gentle refrains, especially on “In a Newfound Land You Are Free”.

O’Brien’s confident vocals contribute to this development. Although raw croons like “my love is selfish” (from Becoming a Jackal’s “Meaning of the Ritual”) aren’t explicit on {Awayland}, his metaphors are enforced by explorative vocal melodies. ”Earthly Pleasure” displays schizophrenic stutters and a Tom Waits-like grumble. The song shines with lyrics like, “It was sensual and pure and he changed that day / Though he can’t be sure if it’s the sickness or the cure.”

{Awayland} assumes an endless pallet of instrumental exploration while still remaining easily digestible. O’Brien, or Villagers rather, succeeded in creating an album rife with adventure and tragedy, made even more addictive with each listen.

Essential Tracks: “My Lighthouse”, “Earthly Pleasure”, and “In a Newfound Land You Are Free”