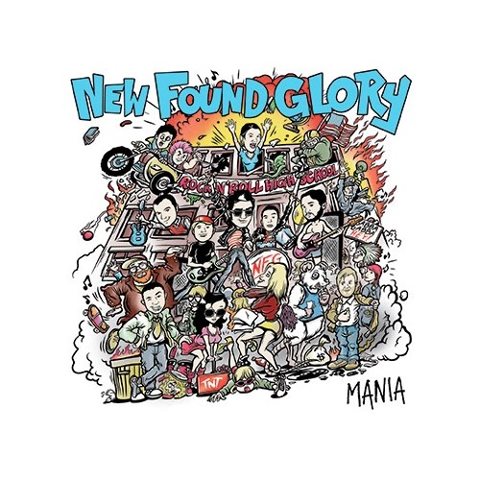 Pop punk paragons New Found Glory have been putting out heartfelt guitar anthems since today’s teens were in diapers. In honor of Record Store Day, the seasoned Floridian rockers assembled Mania, an EP of Ramones covers released on 7” and available digitally the following week.

Mania comes hard out of the gates with “I Wanna Be Sedated”, which may not add much to the original version, but proves suitable. The only real difference is the modernized pop punk guitar sound. In fact, the covers here are so close to the originals that New Found Glory’s own signature sound is all but swallowed up. It’s evident only on “Judy Is A Punk”, where Jordan Pundik’s distinctive lead vocals add the familiar NFG flair.

“Rockaway Beach” and “Do You Remember Rock n Roll Radio” are largely inoffensive, but “Rock n Roll High School” and especially “The KKK Took My Baby Away” verge on obsessive repetition, the kind of sound that’ll tempt you to skip them on replay. Some of that is the nature of the source material, but more of it is the uniformity of NFG’s sound. The glossier production of the covers irons over the lo-fi charm of the original Ramones versions.

A covers EP is a catch-22, really: Add your own sound and offend zealous fans, or stick to the template and bore the critics. Mania is nothing if not respectful and enthusiastic, and it sounds like New Found Glory had fun making it. Hardcore NFG or Ramones fans should have fun listening, too.

Essential Tracks: “I Wanna Be Sedated”, “Judy Is A Punk”