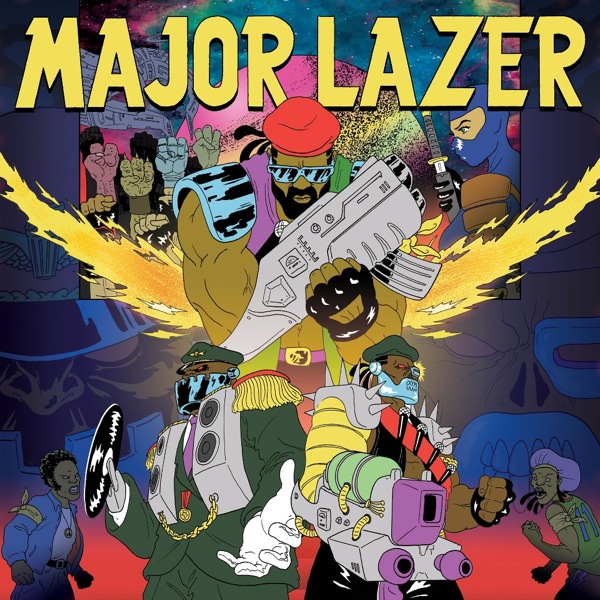 King Tubby, the father of dub music, once famously stated: “Roots music is creative music… It’s original. It comes from the heart. If you want to create a different sound, you create that different sound.” Using his custom mixing deck, Tubby became one of Jamaica’s biggest celebrities during the 1970s based on the success of his larger soundsystem and the progressive production work he had done with the country’s popular artists. Fast-forward four decades and Major Lazer, the fictional Jamaican commando made famous by Diplo and current partners Jillionaire and Walshy Fire, is following a similar trajectory unbeknownst to his devout herd of millennial ravers. On Free The Universe, the outfit’s long-awaited full-length follow up to Guns Don’t Kill People… Lazers Do, Diplo and co. stretch the Tubby philosophy to its breaking point with 14 tracks that span from traditional roots reggae to intentional crossover singles.

Bypassing the album’s converted contributors for just a moment, it’s the dancehall figureheads that [attempt] to provide an authenticity to Free The Universe. During a 2010 Pitchfork interview, Diplo quipped that “dancehall is such an exclusive club. It’s so serious and it’s been like that for a couple of years. For so many artists, Major Lazer is so silly. In Jamaica they don’t want to have outsiders in there, but we’re all a team doing something that’s outside dancehall. We don’t go by the rules.” Garnering the support and participation of Jamaica’s Elephant Man for the dancehall turned acid-techno of “Wind Up” is an indicator that no matter how silly some of Diplo’s production work, Jamaica’s dancehall elite understand the global implications Major Lazer is having on the purveyance of their genre. On the other hand, Elephant Man’s appearance also serves a positive PR bump following a 2012 accusation of rape in his home country.

The work of Shaggy (“Keep Cool”) and Vybz Kartel (“You’re No Good”) try to recreate the magic Diplo accomplished for M.I.A.’s Kala, when the Philly-based producer first met Jillionaire while working in Trinidad. In Maya’s absence the feminine power is encompassed by regular Diplo-collaborator Santigold with minor support from up-and-comers Yasmin and Danielle Haim (of Haim) a top the steady percussion rolls of “You’re No Good”.  The track’s minimal instrumentation, in comparison to the album’s bangers, allows listeners to pick up on Kartel’s multiple references to 50 Cent, Eminem, and Major Lazer’s own “Pon de Floor”. Haim’s effort might be limited to one verse and simple harmonics (about LSD) but with the support of Diplo and Haim’s affiliation with Roc Nation, expect the songstress to begin the same rise of Diplo’s former protégées.

The inclusion of larger singles-moving, profit-generating artists leads to mixed results on Free The Universe. Peaches along with dancehall vocalist Timberlee amplify the carefree Major Lazer mentality on “Scare Me”, where Peaches once again provides her signature sexually explicit metaphors. Dirty Projectors’ Amber Coffman provides balance towards the social consciousness of roots music and a perfect vocal companion to the rocksteady of “Get Free”. However, the lyrics arrive from a political base that Diplo once chastised M.I.A. for overtly including in her tunes. “Never got love from a government man / Heading downstream till the levee gives in… / We ain’t got the money, we ain’t gettin’ out,” Coffman beautifully serenades despite the grave undertones. Not only do the lyrics reflect the cries of America post-Katrina but the prevailing reggae messages of people vs. an unjust government. Reggae’s notions of democratic empowerment are again embodied on the anecdotal “Reach For the Stars” featuring Wyclef Jean. While the track certainly has that sing-along quality it lacks any real staying power with rhymes dedicated to Instagram self-pics.

The output by Diplo’s friend Ezra Koenig (who surprisingly appeared on Diplo’s BBC radio program in August) will be even more forgettable to the masses who populate a Major Lazer live show, and that’s if they actually manage to listen through to its conclusion. Koenig has shown an appreciation for world beats with his work as part of Vampire Weekend; however, “Jessica” is a dub reggae throwback that tries too hard though vocal manipulation and lo-fi processing to appeal to reggae purists.

Definitely geared more toward the dancefloor than his standard Top 40 presence, the Bruno Mars-featuring “Bubble Butt” has the potential to be a booty-bouncing anthem at the same level as Major Lazer’s 2009 “Pon de Floor”. For all those that prefer this energy to that of the album’s roots-influence, save yourself some time and simply add “Jet Blue Jet”, “Jah No Partial”, “Sweat”, “Bubble Butt”, and “Mashup the Dance” to your club-banger playlist.

Diplo’s broad production skills, highly-touted BBC radio program, and in-demand status as both a studio contributor and live act have all established the 34-year-old as one of the music industry’s greatest entertainers and trend setters. Nevertheless, until he sheds his fear of authenticity he will succumb to his own glass ceiling.

Essential Tracks: “Get Free”, “Wind Up”, and “Bubble Butt”