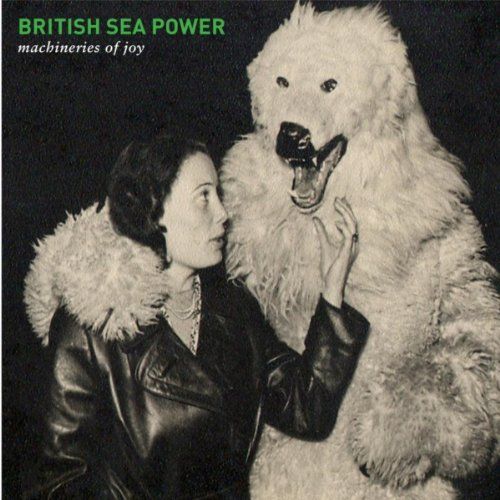 British Sea Power has never been known for their subtlety or nuance. From blustering live performances in decrepit naval fortresses to outlandish lyrics, eccentricity has always provided the backbone for the Brighton band’s freewheeling vibe. Machineries of Joy, draws liberally from their 2012 limited release BSR EPs, stays the course, guided by hyperbole and extremes.

Poaching the LP’s title from a collection of Ray Bradbury short stories, BSP pays homage to the sci-fi icon with spectral, futuristic effects on “What You Need the Most”. Channeling more of this haunting aura, “Machineries of Joy” pairs a heart-twisting viola with Martin Noble’s sparse, glistening electric guitar as a sagely Scott Wilkinson belts: “We are a vision of extraordinary contortion.”

Recorded in the Berwyn Mountains in rural Wales and released on Rough Trade Records, Wilkinson hopes the LP will serve as a “warm and restorative” antidote to this “hysterical place”  in which we live. If the disjointed, hyperbolic Machineries of Joy is any kind of remedy at all, it’s most certainly the hair of the dog.

But BSP struggles to find a middle ground between its jarring, frantic melees and aloof lullabies. Take “K Hole”, an up-tempo ditty that kicks off with a blunt yawp and explosions of electric guitar. It’s a cut that BSP would nail live, but on record it comes off as obvious and contrived for a band with six studio LPs to their name.

Between Abi Fry’s lilting viola and Wilkinson’s cogent, sentimentalist vocals, BSP sails through Machineries of Joy without any fatal blunders. Still, here’s to hoping that the Brighton troupe someday breaks free from their comfort zone of warbling power chords and disquieting lyrics (“Loving animals / I want you to know that it’s wrong, man”) to offer us something that builds on rather than emulates trailblazing offerings The Decline of British Sea Power and Open Season.