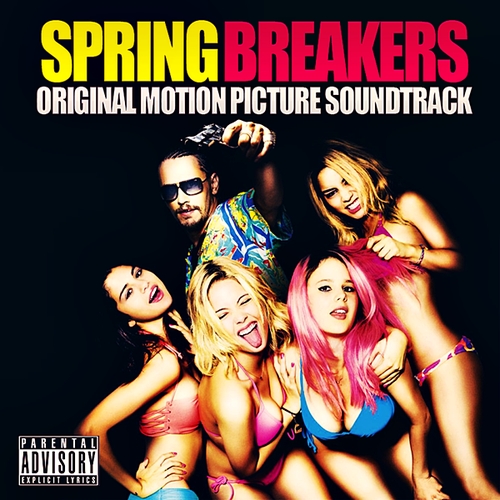 One look at the poster or trailer for Harmony Korine’s Spring Breakers and it’s easy to speculate that the film could have been titled, Fans of Skrillex. The bikini-clad, once-Disney Channel stars look like this year’s Electric Daisy Carnival freshman class, and Skrillex must be what anyone involved in any stereotypical, MTV-esque spring break scene is streaming these days.

So, of course, Sonny Moore’s most popular track, “Scary Monsters and Nice Sprites”, kicks things off, embodying the excessive and brazen nature of what spring break represents. But the slower, piano-meets-wub track “With You, Friends (Long Drive)”, which also hails from his Scary Monsters and Nice Sprites EP, is at this party as well. EDM battles hip-hop as DangeRuss and James Franco’s “Hangin’ With Da Dopeboys”, Gucci Mane ’s “Young Niggas (feat. Waka Flocka Flame)”, and “Big Bank (feat. French Montana)” by Meek Mill, Pill, Torch, & Rick Ross boasts about counting money, being surrounded by diamonds, and rolling into the club 30 deep.

All this accomplishes the goal of a soundtrack and aptly represents what’s happening in Korine’s scandalous world, but composer Cliff Martinez (Drive, Contagion, Traffic) also offers a welcoming alternative to the aforementioned sounds, with ominous electronic arrangements that slow things down and allow the compilation to breathe. Skrillex helps with this, too, as “Ride Home” and “Park Smoke” strip the amphetamines from his signature sound, evoking emotions instead of dance floors full of E. Finally, Ellie Goulding’s infectious radio staple “Lights” closes things out, and the soundtrack’s only female offers its best track.

The album marries moments of both excess and restraint, and the dance between Skrillex and Martinez makes the ebb and flow of the music match that of the plot: a successful score.