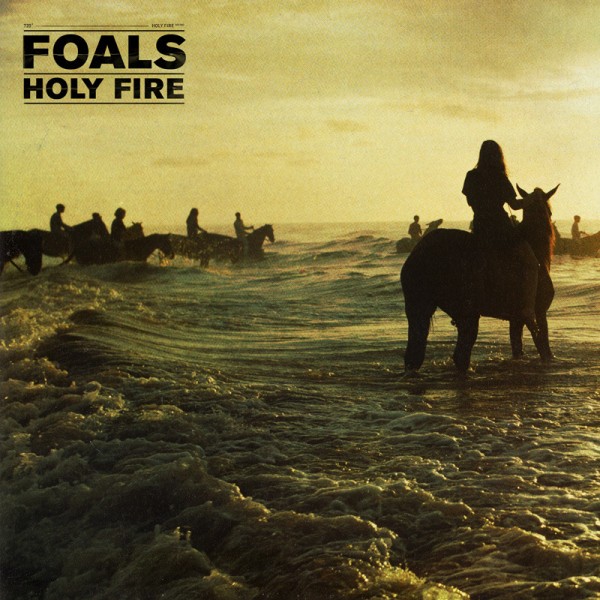 For a band exalted by the ravenous British music press, Oxford quintet Foals continue to push the indie rock envelope to a surprising degree. Rather than fit into any particular fad, they’ve confidently pushed off on their own direction. When math rock was a passing joke in the indie world, they pumped it through the dance floor almost unnoticed. When TV On The Radio’s Dave Sitek was the in demand producer (not to say many indie bands would push him out of the studio today), the band chose to ditch his mix of their debut album and remaster Antidotes themselves. Each subsequent step should take Foals away from massive critical acclaim, and yet that sophomore disc, Total Life Forever, nearly snagged a Mercury Prize. It’s with that confidence they shove Holy Fire into the faces of the indie public, delivering some of their most accessible material to date after years of subverting what to expect.

Coming up to the release of Holy Fire, frontman Yannis Philippakis repeatedly repped the band’s pop sensibilities. “We all really like pop music,” he told Clash magazine, adding that the best of the band’s material combines that with their experimentation. Rather than ditch their many eccentricities to prove that they can do pop (or deeper entrench themselves in the weird as a reactionary middle finger to the attention), the group use those precise mathematical skills to formulate a way to make their experiments sound like pop.

The two tracks that prefaced Holy Fire encapsulate both that duality and the fearlessness that it takes to pull it off. The machine-work guitars that open “Inhaler” recall Battles more than it does any recent British press giant, eventually leading to a hard rock jam that defends territory nu-metal bands tried to invade. Philippakis’ lyrics lean simplistic (talk of “sticks and stones” is a bit obvious), but the crushing rock mass covers for him. This sort of hyper-polished, swaggery axe-slinging would upset the indie apple-cart if it weren’t for that tenuous balancing act. Immediately following that track, the dancing shoes get dusted off for “My Number”. “I don’t need that good advice,” Philippakis calls, insisting that he and his lover have all that they need. That formula sounds like a pop cliché, but an expansive psychedelic bridge and some slinky, skittering guitars keep things from dropping that side of the scale too far.

The flexibility of the instrumentation is key to the album’s success; Holy Fire comprises a string of epic indie rock songs, one after another, and most of them rely heavily on barbed-wire staccato guitar. The group’s ability to subtly shift their color palette, to add little wrinkles, keeps that fact from registering immediately. The surfy waves of rhythm guitar and prominent auxiliary percussion on “Everytime” provide a breath of fresh air midway through the record. Violin swathes escalate the drama of “Out of the Woods”, and electronic percussion bring the dark clouds into “Stepson”. The first half of the slowly building “Late Night” leaves the bouncing bubbles behind, though it does reclaim the jumpy guitar spikes after an earned crescendo. Those precise strikes are a large part of Foals’ identity, and the group (along with big-name production team Flood and Alan Moulder) masterfully weave them into each formula.

Though they haven’t changed their musical identity in the face of the attention they’ve built, Philippakis is more eager to get his point across. The grey mysticism he extolled on past albums is replaced by a more direct approach, his heart not only on his sleeve but not quite as pierced.”Inhaler” liberally dips into “I love you, I hate you” territory, while “Bad Habit” acts as an admission of sins. Even his usually dark outlook can be tamed, as when he’s “never felt better” in the pure physical beauty and escapism of “Out of the Woods”.

There’s an immense confidence displayed on Holy Fire, by Philippakis in particular and the band as a whole. They clearly understand their strengths and play to them, but they also generally know when too much is too much. Philippakis levels his honest feelings, but he also knows when to pepper in the impressionistic lines (there’s a track called “Milk & Black Spiders”, after all). This is Foals at their most mature, knowing that they have a lot to live up to and doing everything they can to deliver.

Essential Tracks: “My Number”, “Everytime”, and “Out of the Woods”