Carrie Rodriguez  Give Me All You Got 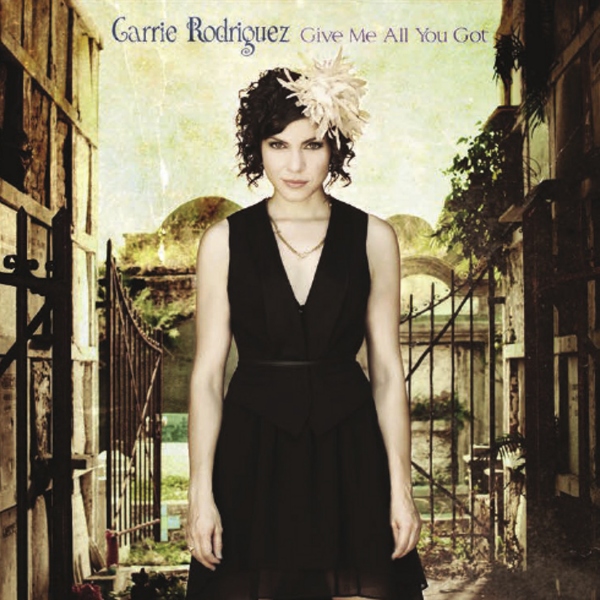 When Carrie Rodriguez wraps her twang around the lyrics to the rollicking opening track “Devil in Mind”, she sings with a force that twists every syllable. From track one, Rodriguez keeps her fists up with an aggressive swagger.

That’s a common sound on the Austin-based singer-songwriter’s fifth solo album, Give Me All You Got. Though, it’s not simply a testament to being a tough girl of America. Instead, it’s a steady album that sets up Rodriguez as a strong narrator through wild or weary moments.

Her gritty attitude is born from her songwriting. Contrary to what a title like “I Cry For Love” might conjure, the song rumbles in with a brooding guitar and Rodriguez asserts that while she will bleed if cut, she won’t cry. Along those lines she balances heartbreak and resolve on “Cut Me Now”, which is something of a slow burning march backed by drums and dirty guitar. Though vulnerable, she steels herself singing, “Do it quick while I hold steady / If you’re going to cut me, cut me now.”

Fortunately for Rodriguez, she’s also working within a genre that can easily communicate both a barroom brawl and a tender love song. She closes out the album with “I Don’t Mind Waiting”, something sweet and simple whose understated guitar and fiddle suit a tune about sitting on a star sipping moonshine. Rodriguez is also joined on the song by Minneapolis multi-instrumentalist Luke Jacobs. It’s a charming little duet, though it’s indicative of the too-clean production that stalls the effort. Every instrument is so distinct and polished that the storied warmth of a southern folk song doesn’t always come through.

Still, Rodriguez best distills her spirit into a single phrase from “I Cry for Love“, when she asks, “Am I tough? Tough enough.”

Essential Tracks: “I Cry For Love”

Previous Story
Listen to a new song from How to Destroy Angels and a Beastie Boys b-side over the phone
Next Story
Interview: Dustin Payseur (of Beach Fossils)
Popular
More Stories
[fu-upload-form form_layout="media" title="Submit Your Photo"][input type="hidden" name="ugc" value="1"][/fu-upload-form]