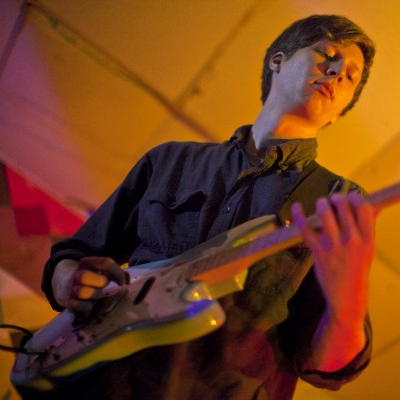 Brown, his foil across the stage, looked a little bleary-eyed behind his sea-foam green Squire Bullet.

I wish I was hallucinating, Savage added to the nearly-full house.

The quartet of post-punk poets wasnt seeing things: Even with the insistent rain outside, the show almost sold out. This sweaty set at one of Brooklyns better-known DIY spots was a kind of victory lap for the Brooklyn-by-Texas band. In the last week, Parquet Courts were featured in three high-traffic profiles at Pitchfork, The Village Voice, and SPIN.

Even with all that coverage, its hard to hold high expectations for a band that’s just picking up speed. After their impressive, under-the-radar full-length Light Up Gold appeared in August of last year  with a rerelease coming this Tuesday on Whats Your Rupture?  the band blipped on the radar only after a couple singles got sticky online. In fact, theyd been tooling around Brooklyn for a couple of years.

Through the hype and the rain slogged the wary, the curious, the confused. As we queued at DBAs entrance, behind an innocuous metal door with no markings, a woman who couldnt find her way in tapped me on the shoulder. Is this a DIY venue or a venue-venue? I asked her what the difference was.

Later, another guy approached me during the steamroll of Brooklyns sludge-noise tape-loop stoners P.C. Worship. Is this the main band? He asked me. Its P.C. right? Like, Parquet Courts? No, I explained, this assault was not the wiry, melodic band hed come to see. How do you know their music if youre not friends with them? his girlfriend asked. I didnt have a good answer. The pair left shortly into P.C. Worships set, not to return.

Excuse my surprise at the paucity of listenership. I guess I expected every attendee singing along to the earworm-narratives across Light Up Gold. Not in the way you’d chant Black Flag or arm-in-arm belt “Hey Jude” or scream sweaty Japandroids linesmore like knowing every line and cadence to Down By Law.

It didnt happen that way. There were a handful of devotees, for sure, pumping fists at the chorus to Yonder is Closer to the Heart. But most of the crowd just responded physically to the faster sections of songs like that and Donuts Only and the chug of Careers in Combat. Set opener Tears of Plenty sounded rough around the edges and the crowd took a minute warming up. But by the time Parquet Courts launched into Light Up Gold opener Borrowed Time the entire place was pogo-ing. Dustin Payseur from Beach Fossils came out of nowhere and took a huge stave dive to the visible ire of someit was the spirit of the set. Payseur punched the ceiling in triumph.

Parquet Courts are lace-up tight live, with bassist Sean Yeaton and drummer Max Savage pounding out the core. Max  singer Andrews little brother  slams on that dry snare drum thats a hallmark of the new LP, while the elder Savage and Brown tied bright, sometimes-noisy riffs around the rhythm that pushed the entire place into a musty fervor. It would have been a perfectly paced set had they not had to improv a down-tempo stoner-lope interlude while Brown replaced a broken stringit was just one dip too many.

But it didnt really matter. The crowd shouted set-spanning demands for Stoned and Starving, the cut (do I need to explain this) about wandering around high trying to find the right thing to eat. Parquet Courts held it for the end. If 2012 was the year we tried to kill apathy, Stoned and Starving might indicate a failure. Sure, it could be seen as an inane narrative about choosing candy in a bodega. But live, Parquet Courts take incessant riffs off to extended jams and then rants about robots and television, bridging an uncontrollable physical gap to a forceful philosophic bent. Even if it got deep onstage, in the crowd, it was just sheer madness  these people actually cared about this jam. I just dont think you can deny a room full of possible newbies going absolutely apeshit for a song about Swedish Fish.