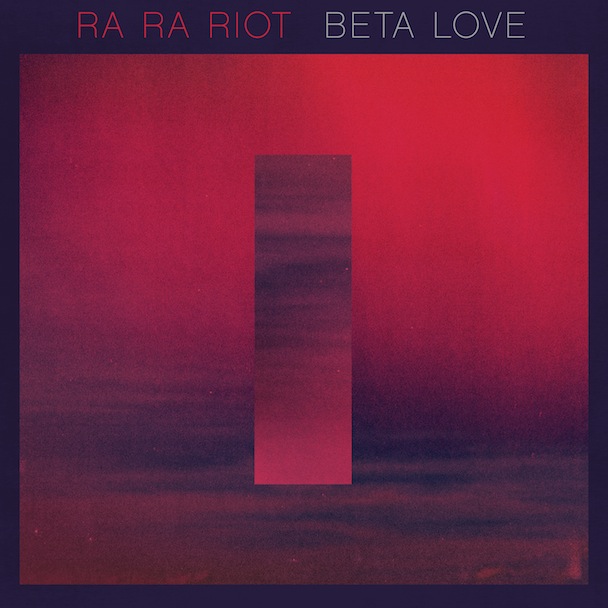 Producer Dennis Herring (Modest Mouse, Wavves,) encouraged Ra Ra Riot to loosen up on their third album, Beta Love. So they swapped instruments. They ditched e.e. Cummings. They consumed A-Ha with their Wheaties. Ra Ra Riot is leaner and meaner – just listen to Milo Bonacci’s chromatic guitar solo at the end of “That Much”.

But mostly, Ra Ra Riot is ready to dance. Really dance. The first several tracks (“Dance With Me”, “Binary Love”, and “Angel, Please”) are saccharine and structured. It’s little shocking how deft these indie-souls are at playing the Robyn card. None of the tracks on Beta break four minutes, yet there are clear moments of self-reflexivity that cushion the new direction:  “I might be a proto-type, but we’re both real inside”, Wes Miles intones on the title track.

In fact, Miles’ voice is better suited for this new style. The increased production, rife with percolating synths, erratic fizzles and finger snaps, underscores Miles’ vocal control, which was easier to discount within the denser orchestrations of The Rhumb Line. On Beta‘s  “Is It Too Much”, Miles sounds similar to Annie Lennox: bare and steadfast.

But the keeping of Ra Ra Riot’s signature sound falls on Rebecca Zeller’s shoulder rest, especially after the departure of cellist Alexandra Lawn. As much as the other guys diversify the sound, nothing crystallizes Ra Ra Riot better than Zeller’s angelic string parts. For this reason, the violin — strong, subtle, or in between – is crucial to the success of this Beta experiment. Synth-pop isn’t a violinist’s traditional realm, but Zeller treads the territory with an inventor’s panache. Her long, lithe scale steals “When I Dream” and her zesty staccato elevates “Angel, Please”. The violin is scaled back in comparison to their previous albums. As a result, the songs that suffer on Beta Love are the ones with no strings at all.

Essential Tracks: “When I Dream”, “Angel, Please”, and “Dance With Me”