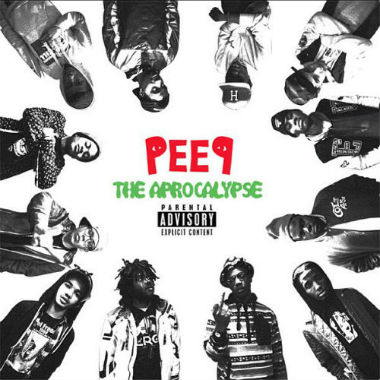 Well, first things first: The death of Pro Era’s Capital Steez last month, three days after the release of PEEP: The aPROcalypse, was a serious blow to both the New York collective and rap fans everywhere. Steez had begun to pick up a more than respectable following in the months after first popping up, with his show-swiping appearance on Joey Bada$$’s “Survival Tactics” making for one of the most memorable guest verses of 2012 (“Leaving instrumentals blue and black / I’m in Marty McFly mode, so tell ‘em that the future’s back”). And while Joey has clearly been the star of Pro Era so far, Steez had emerged as a not-so-distant second. Fortunately, PEEP: The aPROcalypse, Pro Era’s first major full-length team-up, functions as both an admirable swan song for Steez and as proof that he and Joey aren’t all the group has to offer.

Steez was born in 1993, the year of 36 Chambers and Midnight Maruaders; the next few years – the ones when other members of Pro Era were born – saw the release of Illmatic, Lifestylez ov da Poor & Dangerous, and Ready to Die. These and many more New York rap touchstones have always lingered in Pro Era’s music (“free Max B”s and Madvillain interpolations notwithstanding), and that trend doesn’t end here. The beats, featuring Chinatown horns, unvarnished drum breaks, and accelerated samples, are provided by NYC torch-carriers like Statik Selektah and Chuck Strangers. Method Man, Biggie, and the Beasties are all sampled. The phrase “yes yes y’all” is used liberally. But while all of the shameless rearview-gazing could disguise a lack of technical ability or personality, PEEP proves that every PE member has enough of both for it to not really matter that they don’t bring anything new.

Despite its sonic cohesion, PEEP is a mixtape’s mixtape. There’s no real flow from track to track, and playing it on shuffle won’t much damage the experience of listening to it as a whole. Part of that has to do with its structural configuration. Instead of a display of Pro Era’s teamwork, PEEP works as a showcase for each individual member’s talent. Joey leads the way by appearing on 12 tracks, consistently delivering the most vicious lines (“Say the wrong sentence, nigga put a semi to your colon”), but, in stark contrast of what happened with the ASAP Mob’s Lords Never Worry tape, none of the lesser-known MCs get embarrassed by their leader. In fact, “Last Cypher” – featuring one verse apiece from eight PE members – is one of the tape’s standouts, not dragging once during its eight and a half minutes.

When the tape does stumble, though, it usually has to do with there being so many guys on the track that the opportunity for truly fruitful interplay to emerge between them goes out the window. “Wrecord Out” and “Interlude 47”, which feature three and four MCs, respectively, are two of the most forgettable tracks on the tape, probably because they’re both too crowded for there to be any standout hooks or bars (though, okay, Joey’s “I got your doll to do what I want like it’s voodoo” from the former is compulsively quotable). Yet, even at their worst, PE has enough firepower to ensure that the loss of one member doesn’t have to derail them entirely. If they do let Steez’s death slow them down, it’s a loss for everyone.