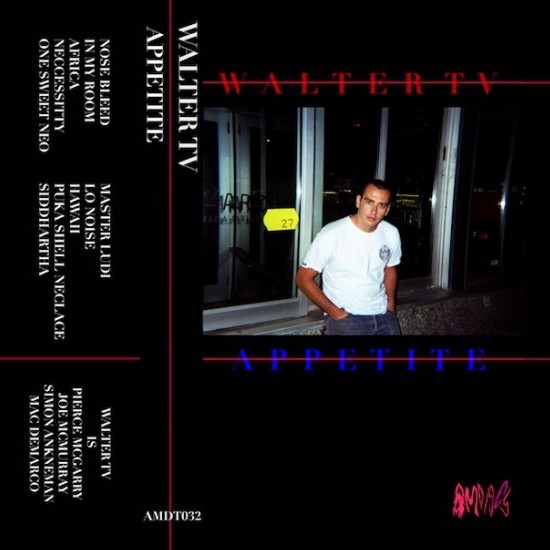 There’s a sort of knowing grin to wisecracker Mac DeMarco’s music that causes you to straddle between two extremes — like you’re giggling with him and in on an inside joke, or you’re the butt of the joke itself. One thing is certain, though: Mr. DeMarco’s hunger for a reaction can’t be curbed.

The mischievous Canadian musician of Makeout Videotape has joined forces with his bandmates Pierce McGarry, Joe McMurray, and Simon Ankneman to form yet another band, Walter TV. Fresh from the coattails of his own solo release 2, DeMarco recedes from the foreground yet brings forth another distortion-addled, twangy cassette with the ravenous and reeling APPETITE.

“Nose Bleed” oozes on by slowly as an unassuming opener, though following track “In My Room” resounds with an extension of squeals seemingly unstitched from Animal Collective’s Strawberry Jam. A weighty penchant for fuzzy guitars pervades the album, sometimes fuzzing and phasing out the other instruments in play. “One Sweet NEO” loses the listener in an alternate universe of static, the near-Earth object only distantly sweet, while you can feel the beer splattering down your leg with the punk-alt anthem you’d expect to hear at a house party in “Lo Noise”.

The album’s slightly quieter moments, notably “Puka Shell Neclace”, are where Walter TV find the utmost chromatic resonance. The woozy tribal beat-inspired percussion on “Africa” is unnervingly catchy, while the plucky riffs on “Master Ludi” and “Siddhartha”, much like the late, great Calgary experimental troupe Women, flutter and fade all too soon.

APPETITE sweats off a mostly satisfying blend of static and demented surf rock. Dig in.