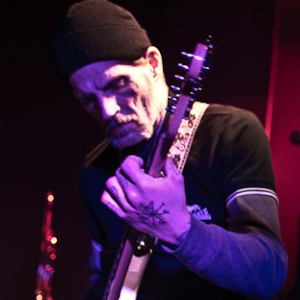 The name at the top of the flier typically has a lot to say about how the entire evening will play out. Following that logic, Earth headlining this bill at Chicago’s Township should’ve meant expecting long, clashing oddity and majestic noise, a presumption that depends on the band’s storied, near 25 year history in drone rock. While the black-clad, wild-maned multitude inching around the sold out space surely had that kind of night planned, they likely never expected to have to seamlessly transition from piano jazz to drone metal to post-rock, with a little bit of collegiate lecturing thrown in.

Opener Stebmo set the weird-bar high out of the gate. Multi-instrumentalist Steve Moore’s eclectic resume says it all, stepping in to add organ or trombone depth for acts ranging from Sunn O))) to Sufjan Stevens. The bass harmonics and jazzy piano flourishes that welcomed each new addition to the shoebox venue raised a few eyebrows. If nothing else, it was a reminder that the Peanuts holiday specials are right around the corner. Moore interrupted his own lithe jazz flow to discuss the theory of “geometry, and harmonics, and the experience of being” behind his upcoming album/book/film project. The lecture on frequencies was intended either “to turn the kids onto” or to save the future of music, but the crowd was nonplussed.

The label affiliation of the next act, Eagle Twin, suggested a far sludgier, louder affair. The Southern Lord duo immediately rolled into a 40-minute pummeling, flowing consistently from apocalyptic, biblical doomscape to the next. “We’re heading out to Eden,” vocalist/guitarist Gentry Densley roared out, a hint of Tuvin gravel thickening the soup. Tyler Smith’s dinosaur stomp percussion propelled constant references to death, volcanos, and monsters, a satanic specter looming large throughout the massive set. The head-banging signalled a massive gain in appreciation, and that warmth swelled literally through the room, the growing crowd steaming up the windows with their howls of approval.

Requests to refrain from flash photography were posted around the room (and sent in e-mail leading up to the event), and bassist Don McGreevy wanted to instill that this wasn’t ignored. “No flash photography, and that’s not just because Dylan’s an asshole,” he grinned, before adding that this requirement was due to severe “medical issues.” That good-spirited jab at frontman Dylan Carlson notwithstanding, the four-piece (Moore returning to stage on keys and bass trombone, and Adrienne Davies on drums) seemed to have a positive working relationship, their 10-plus minute compositions requiring intricate, focused connection, their minds working as one on consistently unified riffs.

Carlson introduced a new song, “Badger”, before punching out a Western-tinged, post-rock jam. McGreevy and Carlson linked their riffs, churning and weaving apace, all as Moore added some more of his piano twinkles. That particular addition seemed a bit incongruous, but they warmed to the soaring guitars. Davies’ splashy, cymbal-heavy kitwork pushed that piece forward, while it anchored the angsty “Old Black”. The song, according to Carlson’s intro, is about “a cat and also a tour van,” but the rich guitar tones felt baked in the sun of the Southwest, nightfall lingering, the soundtrack to some Cormac McCarthy story.

The warmth in the room might’ve been overcoming more than just the layer-shedding onlookers, as Carlson felt the need to ditch his long-sleeve shirt. “I promise I won’t do a Matt Pike or a Chris Cornell,” he smirked, taking on two of the once most shirtless rockers in the business. The biggest pop of the night went to the title track of 2008’s The Bees Made Honey in the Lion’s Skull, the riffs getting louder in response. The buzzing raga-like composition found Carlson dropping metallic licks from his guitar over the rhythmic pulse. The packed room might not have expected to get to this ecstatic drone the way that they did, but they sure seemed glad that they were there.