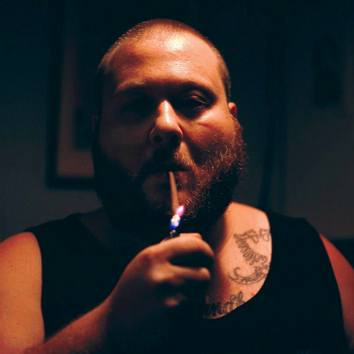 Action Bronson, the freshly-made rap icon from Queens, is just sitting on the beach in Miami, smoking “wax”, and waiting for some girls to walk by. It’s hard to tell whether this is him on the clock or not. When we spoke, it was the first day of his tour with West Coast icons Cypress Hill. He hadn’t even met B-Real or anyone from the Cypress Hill crew yet, but he was looking forward to the tour — at the time, it was just him, his vaporizer, and the dream of girls. His publicist told me there was a lot of weed that was going to be smoked between on the tour, which is not surprising. Even if someone kept track of the amount the two went through per day, and they said it was over two pounds, it probably still wouldn’t be surprising

Joining him on some later dates is another icon hailing from the West Coast, The Alchemist, who produced Bronson’s latest album Rare Chandeliers front to back. Through 13 tracks, Bam Bam and Alc converse — they fall into each other’s groove to bring out a more sinister Bronson, a step beyond the hijinks of his mixtape Blue Chips he did with producer Party Supplies earlier this year. Here, Bronson is focused, precise, takes turns with ease — but if you know Alchemists’ beats, that shouldn’t surprise you.

And while he hasn’t fully shed his skin, he’s moving forward without retreading his steps. He’s no longer the chef who raps. The Ghostface comparisons are fading away. He’s leaned back on his heels, letting it all come to him naturally, and like he goes on the album, Action Bronson is set to take what’s his: “Bitch, I deserve you.”

You’re in Miami — what’s around you right now?

I’m on the beach right now. Old people in bikinis  Obviously I want to see some Brazilian bitches and Dominican girls. Hopefully I’ll see some in a couple of seconds. I’m just here with my crew.

Who do you think can smoke more, you or B-Real?

I don’t like to speculate, man, I just know I’m a heavy smoker. Bottom line. Not just regular weed but the hash, the wax, anything.

Wax is just concentrated THC. Only the good stuff.

Is that what you have with you in Miami?

It is, that’s what I have with me right now. Brought it on the plane with me. I’m smoking out of my custom Action Bronson G-Pen.

I didn’t know I was a hero to some people, man, fuck. Thanks.

Do you feel more responsible now that you’re more focused on your rap career?

People want me to keep rolling and just being me. I feel if I changed, they’d be tight, but I just gotta stay me. Stay level.

Back in Queens when you were younger, what was the first Alchemist track that caught your ear?

Obviously [Jadakiss] “We Gonna Make It” and [Prodigy] “Keep it Thoro”. Those were just knockers. Kool G Rap and Mobb Deep “The Realest”. That’s the best.

Was No Idols the first time you worked with Alchemist?

I’ve been working with Alchemist for about a year-and-a-half now, but this is the first time we put anything out.

Is Rare Chandeliers all you’ve been doing with him, or is there more stuff to come out?

No Idols was Domo’s project — so we did that and we knocked out a bunch of other joints. There’s like 40 songs, but only you know a couple of them made it on this mixtape album.

You said in a previous interview that weed sponsored Blue Chips. What sponsored Rare Chandeliers?

Probably one that my grandmother makes.

Who is “The Symbol”?

I am The Symbol. I’m the one that saves the day. The guy. The vigilante fighter. The one that’s never going away.

So that’s who you are for the music video for The Symbol?

Yup. In real life — everywhere. I’m out for justice. I’m out to take what’s mine.

Do you feel like the music video is an accurate representation of your real life?

I — it’s an amazing caricature.

Do you still have the wig from the video?

Randy is this next producer that Alchemist just signed. And he’s like one of the illest ever — he’s crazy. He ghost-produced a couple of joints on the album. He’ s a motherfucker. He’s from Maine. He’s wild. He just moved out to L.A.

I want to talk about your beard. I think you have a great beard. I’m jealous because I’m 27 and can’t grow a beard. Do you think that anyone could challenge you in the beard game?

Nah, my beard is fully stacked, you know what I mean? There’s too many different layers of colors for it to be fucked with. It’s so rich. I only had a chinstrap beard growing up.

Would you shave your beard?

No. That’s not even in the realm. This is a six-figure beard right now.

Your video reminds me a lot of Charles Bronson films — do you have a favorite?

Obviously Death Wish. Me and my grandfather used to watch it growing up.

Have you ever written something that is too much, that you said “No I can’t say this”?

No. Well yeah, one time. Something about doing something to a Jewish girl on her bat mitzvah night. But that was a long time ago. I thought that would be pushing it. I say a lot of shit.

Do you ever come across people who are offended by what you say?

No — I think people mostly find it funny, and humorous, and enjoyable. It’s tongue in cheek!

On Rare Chandeliers, it seems like you’re less self-deprecating than you were on your previous releases. You’re poking fun of yourself less. Is that confidence something that has come with experience?

Nah, I think the music really dictates what I do. You can’t keep doing the same stuff, it’s not cute anymore.

What’s your favorite track from the album?

I would say “Bitch I Deserve You” with Evidence

How’d you hook up with Evidence for this album?

He’s good friends with Alc, and he was just chillin over there and we were just cool.

I think you really brought out the best from the guests on this tape. They bring some of the best verses they’ve done all year. Is that you or is that Alchemist bringing that out?

I think it’s a combination. Motherfuckers, like it’s all competition at Alc’s house. You want to be the best in the house. So I’m coming in from New York, and I’m writing three songs a day and I’m doing what I’m doing, they’re seeing what he’s doing, and they just trying to bring their shit. Schoolboy’s my favorite, you know, he fucking murdered that shit. You know? You know?

So where did you get the name: Rare Chandeliers?

I was sittin in my house, talkin to Alc, and I looked up and saw a chandelier. And fuck it, you know? Rare chandelier. Weird  you know?

Did you work close with Alchemist like you did with Party Supplies when you worked with him on Blue Chips?

Yes, same thing. He was making beats right next to me while I was writing. That’s how I like it. I made like four trips out to L.A.