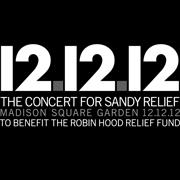 Taking place at New York’s Madison Square Garden on December 12th, the aptly titled 12-12-12: The Concert For Sandy Relief is being put on Clear Channel Media and iHeartRadio in conjunction with The Weinstein Company and The Madison Square Garden Company. Those companies previously staged The Concert for New York City in the wake of September 11th.

Proceeds from the concert will benefit the Robin Hood Relief Fund. Additional artists and ticket information will be announced in the coming days.

According to the New York Daily News, the concert will also be televised by an unspecified outlet.