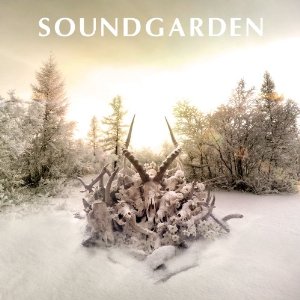 “Knights of the Soundtable ride again!” tweeted Soundgarden frontman Chris Cornell on New Year’s Day 2010 — a six-word table scrap that nearly three years later has grown into a full-fledged banquet for a once-starving fan base. Since Cornell’s #newyearsresolution, ravenous Soundgarden fans have feasted on a North American tour, two new compilations, and the occasional fresh slab of music. And now, after 16 years of salivating, Soundgarden’s “knights” finally have the chance to satisfy their hunger with a new full-length album, King Animal.

But what can listeners expect from a band whose last record came out pre-South Park and back when Radiohead was still just that “Creep” band from the UK? An anxious lead single titled “Been Away Too Long” may seem telling, but “been away” doesn’t mean musically dormant. Cornell’s varied solo work and time fronting Audioslave have made him a surrogate Robert Plant to a second generation of hard rock lovers; celebrated guitarist Kim Thayil and bassist Ben Shepherd have periodically surfaced on projects; and drummer Matt Cameron has spent a workmanlike decade and change pounding the skins for Seattle brethren Pearl Jam. Predictably, then, King Animal sounds like a record firmly rooted in 2012 rather than an attempt to revisit the ’90s and deliver Superduperunknown or Downer on the Upside. It’s a version of Soundgarden that remains heavy but sacrifices some of the band’s primal bluster for production polish — a swap that ultimately relegates King Animal to prince status.

All the components that made Soundgarden unique are present on King Animal. Early track “Non-State Actor” mixes in that familiar foreign rhythmic flavor, punctuated by Cornell’s grating vocal deconstructions on the choruses. Lumbering “Blood on the Valley Floor” recalls standard heavier fare with its mid-tempo grind and bold guitar incisions. And “Been Away Too Long” matches melody to mayhem, with Cornell’s voice oscillating between extremes of tattered roars and banshee wails, miraculously locating a smooth croon in the middle territory.

More rewarding, though, are songs that feel like significant evolutions or departures from where the band used to tread. Soundgarden’s famous odd time signatures evolve further on standout “By Crooked Steps”. Cornell soars above jackhammering guitar parts and straight-ahead drumming, a mismatch that somehow sounds natural while claiming new ground for the band. “A Thousand Days Before” belies its heaviness with an uplifting vocal tone and a warm guitar line that playfully chases its tail — a surprising entry point into an expansive rocker that takes several listens to fully appreciate.

Much of King Animal will satiate even the most skeptical listeners, but the record also slumbers through several cuts that neglect the fact that Soundgarden, even all these years later, is still an animal best kept in a rusty cage. The production on the rallying “Taree” (among others) removes nearly all the song’s rough edges and sandblasts away its grimy surfaces. The barn-burning “Attrition” is a smooth injection when, in reality, Soundgarden’s allure has always been a habit of letting that needle snag and irritate a bit. Unfortunately, King Animal too often leaves the listener imagining what a song would have sounded like without the sanitizing.

Production issues aside, this record proves that Soundgarden still have their muscle but also hints that they are in the process of figuring out how to flex it again. For every realized track like “Worse Dreams”, with its circular vocal phrasings and slippery riffing, there’s a jam like “Eyelid’s Mouth” that completely loses its identity — in this case, via an almost painful chorus that asks, “Who let the river run dry?” Still, there’s more than enough merit found in King Animal to ensure that any future tweets by Chris Cornell about new Soundgarden music will confidently be filed under #reallygoodnews.

Essential Tracks: “By Crooked Steps”, “A Thousand Days Before”