Prince Rama – Top Ten Hits of the End of the World 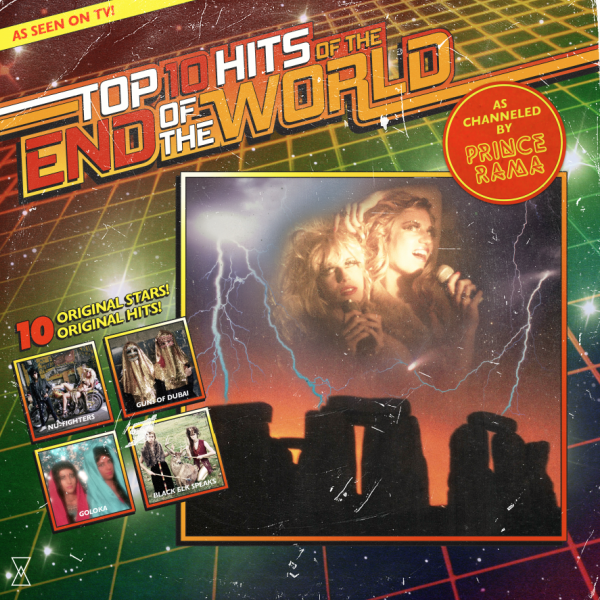 Sisters Nimai and Taraka Larson never wanted for high-concept. Their albums as Prince Rama were indebted to their childhood in a Hare Krishna community, drones and mantras proliferating, Indian flourishes appropriated at will. The results were occasionally clumsy, often entirely over-blown, and always entrancing, whether due to the power of the music or the sheer idiosyncrasy of the artistic image expounded. As if that weren’t enough, the duo returns with Top 10 Hits of the End of the World, a Capital C Concept album that sees the sisters embodying 10 different bands (“10 original stars!” the ’80s apocalypse album cover promises) in a sort of Now That’s What I Call Music! for the Thunderdome set.

So, in a sort of Russian nesting dolls situation, Top Ten Hits often sees a band with a highly stylized identity sitting inside of another band with a highly stylized identity. More often than not, these halves clash, one entirely overpowering the other, negating what makes the concept interesting. There’s a standard droning, tribal rock band at the center, and then a layer of ritualistic chant, then some Bollywood flair, and then a bunch of different layers filtering in and out of focus. Some of the layers clash and others sync up nicely; simultaneously, there’s a sense of Prince Rama as concept sitting at the center despite the schizophrenia, but the experience also feels inherently fractured and difficult.

There’s been an increasing amount of glitter in the Larsons’ mystic psychedelia, so the presence of thin, shiny pop shouldn’t be all that surprising. The sisters’ disco pop identity, I.M.M.O.R.T.A.L.I.F.E., contributes the cloying “Those Who Live For Love Will Live Forever”, where insistences that “I am here/ I love you” could signify the importance of love in the apocalypse. The simple rhythm and synth pattern stagnates for over five minutes, leading to a climax that argues that “the end is near/ and you shall live forever,” noise finally blurring the trite, dress-up scene. Similarly, Hyparxia is Prince Rama at a reggae-tinged Madonna whisper, with too little change occurring inside the shell of swirling pop. The cornball pop of Motel Memory similarly meanders. It’s clear throughout these tracks that Prince Rama are enjoying acting these scenarios out, but there’s not enough to establish any of these sounds as something beyond a diversion.

When the Larsons stick closer to their usual tools, which is to say when they sound like themselves instead of forcing themselves on a cheesy karaoke cut, the results improve tenfold. “So Destroyed”, their turn as Rage Peace, may be the best on the disc, something that actually warrants an entire album. The blown-out track brims with dubby synth-bongo beat, shimmering high-end, and swanky bass, the two vocalists shout-singing some vaguely protest-y lines that get the attention. The track makes sense considering their work with fellow tribal-apocalypse act Sun Araw, but in a much more pop-friendly way. The lumbering bass of Guns of Dubai’s “Blade of Austerity” works at the same end, a snake-charming synth line anchoring the darker take on the formula. When “channeling” Black Elk Speaks, pitch-shifted vocals speak of gods, Eastern synths twisted skyward, the ritualistic cranked to 11.

The pair seems too interested in ditching the tribal, mystic image when donning the sparkly spandex, and reports of their live show suggest that its fun for crowds too. That said, patching a few tracks that lean in that direction in the middle of others that dive toward every other cardinal isn’t doing them any favors. It’s similarly detracting from the supposed severity of their droning cuts. Once the dolls have been pulled apart to find out what each and every layer is composed of, its difficult to wrap your mind around putting them back together into any semblance of a logical package.