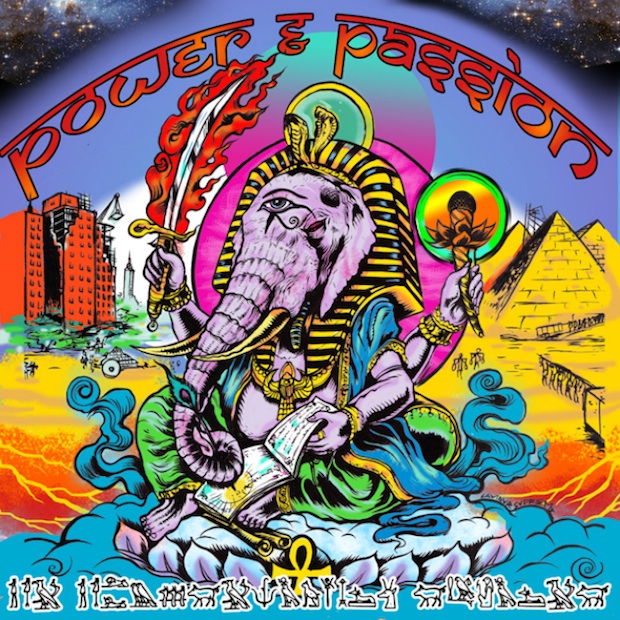 I’m man enough to admit when I’m wrong. In my review of Mr. Muthafuckin eXquire’s Man In The High Castle mixtape, I pondered whether or not that effort was the last gasp of the real eXquire, before Universal Music Group got their major label tentacles all over him for his major label debut, the Power & Passion EP. As it turns out, UMG wasn’t the villain; all on his own, eXquire’s managed to forge a six-track effort that’s only power is to disappoint.

As I tried to get across in my High Castle review, eXquire is likable because, even at his most superficial and disgusting, there’s a level of humor and wit to all the drinkin’ and objectifyin’. The Lost in Translation track “Cockmeat Sandwich/Pissin’ Between Train Cars” has lines about facials and a fouler recreation of Biggie’s blowjob skit from “Respect”. But you laugh because, like a friend telling a dirty joke, the offensive parts are done in good fun and for the sake of your entertainment. With tracks “CAri ZALloni” and “Cheap Whores & Champagne”, that jovial quality is all but absent, leaving something vacuous that eXquire’s normally so much better than.

The former is an overwrought ode to sunglass maker Cari Zalloni, and though eXquire’s materialism is nothing new, it usually shines like gold, even if he rhymes about the female body or liquor, all because he makes you feel his passion and a sense of emotional depth even when there is none. Plus, the chorus sample, seemingly ripped from the soundtrack to The Mummy, only makes his listless behavior all the more ineffectual.

“Cheap Whores & Champagne” suffers not from apathy but over-concern. The appeal isn’t eXquire enjoying the titular objects or explaining his winning POV (“I was in Austin rockin’ a fur hat/ like fuck the weather/ I’m from the Passion, we don’t respect weather/ we only respect texture”). Instead, it’s how he balances it out emotionally, attacking everyone from his friends and his money to “parasites suckin’ me dry for half my life,” and even himself (“fuck my mind/ fuck my search for inner peace”). Still, it feels like he’s overcompensating, trying to be too many things at once, without giving enough space to either perspective. It’s as if he’s forcing himself to believe that he deserves to be in the big leagues.

Despite the shortcomings, the EP isn’t all that bad; the issue is that the positives fail to make up for the really disappointing parts. Together, “Aggin Laer” and “Telephuck” are almost enough of a combined force to result in one really great number. The former sees a return of eXquire’s more playful lyrics (“put this million dollar dick inside of $20,000 bitches/ Shorty work at Target but I don’t need a bargain”). Add to that his energy level and the beat comprised of mutilated guitar and woozy drums and he’s in for a good start, even if it is kind of minimalized and under-explored.

“Telephuck” is almost a challenger for eXquire: it features one of his biggest (at least popularity-wise) collaborators in Gucci Mane, and he’s also working with a production legend in El-P. There aren’t many obvious signs about why the track is so vital; the lyrical content, mostly references to boozin’ and countin’ stacks, is so-so, and the beat, though an alluring blend of choppy synths, isn’t anything groundbreaking. What makes it a victory on the record, though, is that eXquire is right at home on the track, sounding as if he belongs with the big dogs, not letting himself buckle under the pressure, even if he’s not exactly delivering his A-game. It’s another good start, and on this EP, that’s surely good enough.

If there’s one track that’s enjoyable for more straightforward reasons, it’s “The Message Pt. 1 & 2”. Again, it’s got little do with the lackluster lyrics (“you the type of nigga that I can’t stand/ you the type of nigga that prolly hold hands”) or even the drum-heavy groove courtesy of Blue Sky Black Death. No, it all falls on eXquire and his emotional capacity. Part one features eXquire at his most easy-going and charismatic, while part two sees him go all Mr. Hyde with an enraged and poisonous flow. Even with the emotional 180, eXquire manages to stay focused and lethal, proving he’s mastered expressing himself through energy and intent alone. Now he just needs to do it more often.

During the course of his grand debut, eXquire takes a moment to monologue on “Supa Speaks”, where he talks about the intensity of where he grew up and how you had to take the things you’ve wanted. But as it once again turns out, eXquire’s the one who’s been taken: by his ego, his self-doubt, his desire to deliver, and a need for unquestioned individuality. What is eXquire’s power and what is eXquire’s passion? It’s the power to lyrically assault the audience with dick jokes and deep-seeded revelations alike and a passion capable of making every syllable seem life-changing.