How to destroy angels_ – An omen_ EP 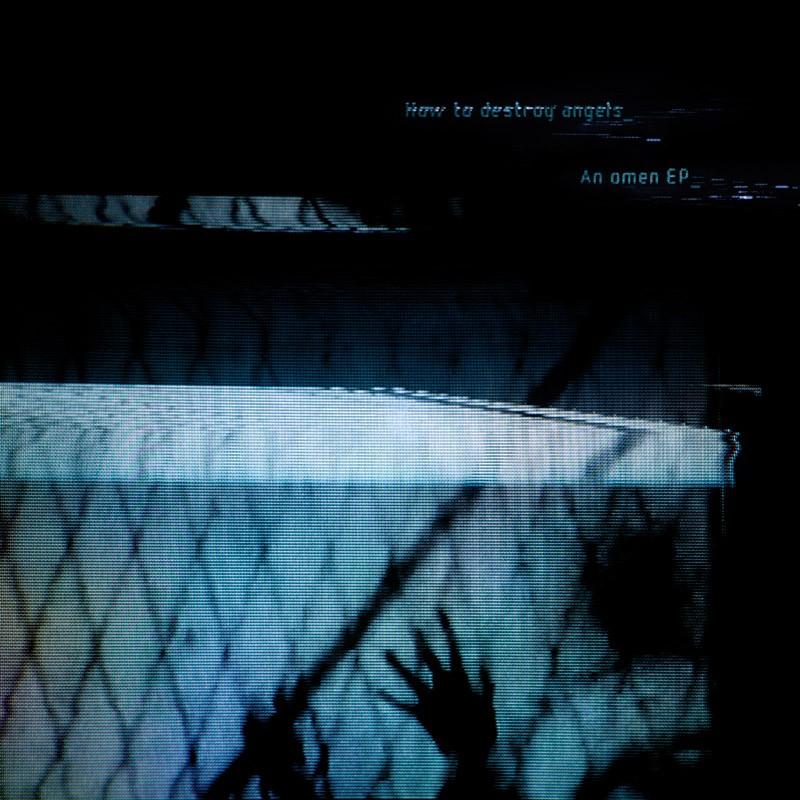 “I take the thought of you and burn it to the ground / Sometimes I’m waiting for this ice age to arrive / Sometimes the hate in me is keeping me alive,” serenades Mariqueen Maandig over the the bleak Skinny Puppy-meets-Sheryl Crow soundscapes of “Ice age”. It’s a statement quite similar to those professed since 1988 by How to destroy angels_’s frontman Nine Inch Nails’ founder Trent Reznor, who also happens to be Maandig’s husband. Aside from the track’s nearly buried industrial screeches, the music bears zero resemblance to the sonic-brutality Reznor first produced on Pretty Hate Machine — which hit shelves when Maandig was only eight years old. The subtle acoustics of “Ice age”, along with several other ambient elements laced through An omen_, were conceived during NIN’s Ghosts I-IV, nourished on the drama of Reznor and Atticus Ross’ movie scores, initially tested with HTDA’s eponymous debut, and are now maturing into a unique entity with the ability to challenge preconceived Reznor standards.

No matter the moniker, Reznor has always produced music through the eyes of a tortured genius. Even on NIN’s most synthetic-sounding tracks, Reznor’s gruff delivery and inner-dialog lyricism tore to the core of disenchanted Gen-X’ers. When composing scores for David Fincher’s The Social Network and The Girl with the Dragon Tattoo alongside longtime studio partner Ross, Reznor created instrumental reflections of his own tumultuous early adulthood that was shared by the films’ protagonists. Like Jesse Eisenberg’s Mark Zuckerberg and Rooney Mara’s fictional Lisbeth Salander, Reznor was cast as an outsider due to his obsessions with perfection. Post-addiction, -Academy Award, and -baby, the general public no longer places Reznor within this darkened void outside pop music, limiting the creative fodder that previously fueled the legendary producer.

Just as the title hints, the six tracks that comprise An omen_ are a prophetic indicator for the aesthetic of the outfit’s long-awaited full-length. The EP does arrive with the compulsory NIN-inspired track, “Keep it together”, but the quartet (now featuring longtime NIN visual artist Rob Sheridan assisting on sonic modulation) makes great strides in eliminating the rehashed NIN basslines and loops that could be heard on the group’s debut EP. From its onset, An omen_  helps eliminate another folly of the debut: Maandig’s inability to project emotional depth through her vocals. On “Keep it together”, “On the wing”, and “The loop closes”, Reznor and Maandig create disjointed harmonies that echo the constantly shifting analog-synthesizer loops of the backing music.

The EP may be the current embodiment of Reznor and co.’s constant evolution, but many of the loops seem tied directly to British ambient-techno pioneers that frequented the clubs around London’s M25 circa 1990. “The loop closes” is classic-Reznor at his finest, shouting, “The beginning is the end/ Keeps coming round again” over the track’s funky synth repetition. The spiraling loops are novel, but the track is little more than a pairing of the backbeat from “Fur Lined”, off that debut EP, and the psychedelic modulation exemplified on Orbital’s “Input out”. Ivory strokes and Maandig’s fragile vocals add layers of delicate warmth to the cavernous, industrial vibe of “On The Wing”, but again, the analog blips and downtempo breakbeat listen like a throwback to Orbilivion-era ambient-house.

As a lifelong Reznor supporter, it’s easy to criticize his ongoing metamorphosis. At the same time, one must be able to value this transformation. The transition between “On the wing” and the ghostly whispers of “The sleep of reason produces monsters” is beautifully unexpected, pointing to a couple that have found comfort in their insecurities and can now build a future from the still-smoldering embers of the past. Named after an 18th-century Spanish etching, the latter track is a near-perfect aural representation of the deviant entities that can turn the greatest daydreams into the most horrible nightmares.

Although once again signed to a major label, Columbia, and admittedly aiming to reach a more expansive market than NIN’s efforts have garnered, An omen_ is by no means an easy listen, or one that avoids experimentation. Beginning to end, the four-piece works in new instrumentation, utilizing what sounds like an altered didgeridoo on the modernized tribal rhythms of “Speaking in tongues”. The EP’s major aesthetic shifts do lead to one issue: the lack of a core or soul to How to destroy angels_, a shortcoming which will hopefully be resolved on the outfit’s forthcoming long-player. With another NIN release also on the horizon, the duo of Reznor and Maandig best hone in on a solidified voice, or risk cementing this outfit as a vanity project Reznor created for his young wife.