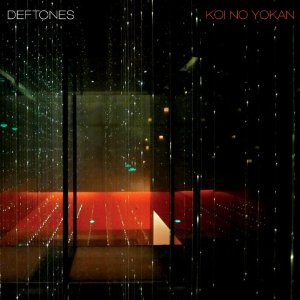 Love starts with lust. It keeps us awake at night, drives us to drinking and thinking too much and listening to sad songs. We pursue the accompaniment of another because our hearts tell us to. The presence of certain individuals—their appearances, their personalities, their smells—triggers endorphins in our brains. It’s the most human of feelings; it intoxicates us when we encounter it, and we yearn for it when we’re without it.

These are the things you think about when you listen to Koi No Yokan, an album teeming in romantic sensuousness and melancholia. Since 2000’s White Pony, the Deftones have shown an affinity for such topics. Frontman Chino Moreno hits saccharine high note after high note as he details the skin-on-skin moments when lovers are at their most fervent. If things aren’t passionate, or if there’s turmoil, he screams his fuzzy scream, exorcising anxiety through torrents of vocal aggression. Despite his occasional catharsis, Moreno remains optimistic. He’s in it for the skin-on-skin; he believes in romance. And that’s why Koi No Yokan (Japanese for “love’s premonition”) is such a sexy, meditative record.

On “Romantic Dreams”, Moreno states his infatuation plainly: “I’m hypnotized by your name / I wish this night would never end.” The warm guitar tones percolate in powerful waves. Koi No Yokan sees the Deftones fully embracing the shoegazer elements that were only experimented with on past albums. And not only have they embraced these aural textures, but they’ve mastered them. “Entombed” is an impressionistic track framed by bright keyboards and a pattering drum machine. Halfway through the song, the instrumentation drops out and we’re left with the noise of a solitary guitar. It dwells, kindling, floating in a pool of buttery feedback.

It seems the Deftones are getting soft—in a good way. This is a band that sprung from the nu-metal movement of the mid-‘90s. Bonecrushing singles such as “My Own Summer (Shove It)” were played on alt-rock radio alongside the likes of Limp Bizkit and Korn. But even then, upon hearing those early singles, one could tell that the Deftones weren’t like their brethren. They actually cared about how their songs felt and what the lyrics meant. Now, they understand this more than ever, and if that means eschewing the pummeling power chords that earned them Platinum certifications, then so be it.

But that’s not to say the Deftones have completely lost the ability to pummel. Opener “Swerve City” sways between delicate jangles (during verses) and dominating groove metal (during the chorus). “Leathers”, the album’s lead single, is a raging anthem about speaking your mind at all costs (“Come forth, confess/ Extend your tongue”). The loud songs are great, but when Koi No Yokan gets quiet and contemplative, it becomes truly striking. Why can’t the ambient guitar intros of “Tempest” and “Rosemary” be infinite? Why can’t Moreno’s blissful tenor be omnipresent? The fleetingness brings you back the album. You remember the slow songs, the open spaces, and the introspection they encourage.

And that’s why Koi No Yokan is ultimately a record about love. Moreno emotes, “I wish this night would never end”, and then the listener recalls a time he or she shared that romantic sentiment. Music succeeds by throwing itself into the listener’s arena; we can form connections to the words and sounds. It becomes ours. Moreno told Consequence of Sound’s Sami Jarroush that the band wrote Koi No Yokan on its own time, at home on boom boxes (past material was written spontaneously in the studio). This approach suits the Deftones. The songs have more personal bite and emotional density. They have a soul.