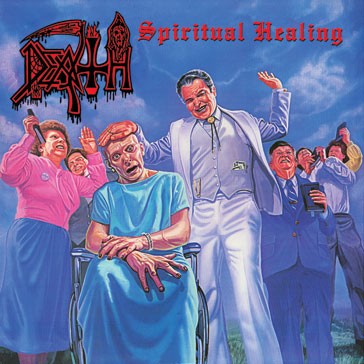 Death writes about life, but not as we know it. They profile the dregs of society: the malformed, the defective, the insane. Spiritual Healing opens with “Living Monstrosity”, a song about a baby “born without eyes, hands, and a half a brain” — the product of a coke-addled pregnancy. The band follows with the aptly-named abortion-themed “Altering the Future”. Frontman and chief songwriter Chuck Schuldiner debates both sides of the argument (“Creating a life only to destroy” v. “Abortion when it is needed”) before concluding pro-choice (“The one who is with child, it’s their choice to make”).

This is thinking-man’s metal, and 1989’s Spiritual Healing, which is being reissued by Relapse Records, is Death’s most lyrically dominated album — a conceptual piece about the physically and mentally crippled. It’s as though Schuldiner based his words off medical journals, police reports, and Oliver Sacks novels: “Defensive Personalities” observes bi-polar schizophrenia; “Spiritual Healing” is about a pseudo-religious murderer; and “Low Life” rails against amoral bottom-dwellers who cheat to get by.

Feeding off anger and neuroses, Death plays minimalist heavy metal at high speeds and with brutal strength. The thin production (accentuated by the reissue’s improved mastering) is purposefully bleak; it’s a platform for skull-pounding power chords, growled vocals, and tales of the intrinsically hopeless. It’s hard to enjoy this music; it’s so abrasive that it can only be felt and experienced. But in this way, it’s affecting. You will react to it.

The three-disc deluxe edition includes outtakes and an audience-recorded live show. Neither is practical, but they do serve academic purposes, depicting how these songs came to be and what they sounded like live. Although the band’s earlier albums are lauded as the origins of death metal, Spiritual Healing saw Schuldiner’s intellectualism blossom into unadulterated aggression. Relapse gives it the comprehensive reissue that it deserves.