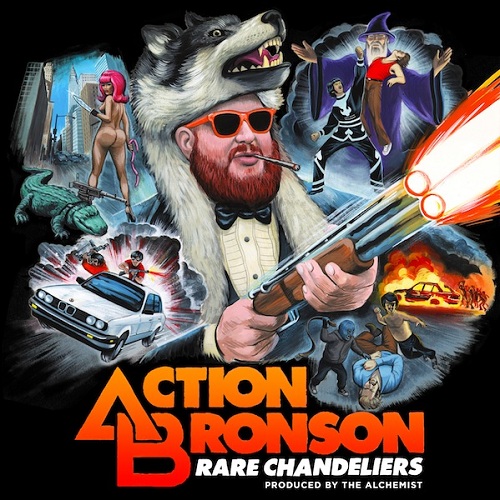 Of the blogosphere’s most beloved rappers, Action Bronson is far and away the most compelling. From his backstory (son of Albanian immigrants and a professional chef for the New York Mets) to his penchant for pissing mid-concert and, of course, his undeniable presence and rhyme skills. The problem is, Bronson has yet to do anything to really bring himself to the next echelon, not yet unveiling that huge release or dropping that groundbreaking song to secure his much-deserved spot. With Rare Chandeliers, which features production from the iconic The Alchemist, Bronson may not have released that elusive hit, but he continues to lay the oh-so crucial groundwork.

The mark of any great MC is his ability to play with words, and Bronson’s proven himself in the past to be both abstract and utterly disturbed (“Bird on A Wire” features the line “leave the party with your daughter / in the morning do karate in the water”). This time around, he’s more lethal than ever before, further pushing experimentation with the relationship between context and sounds, without being overly involved or hard to enjoy at face value.

His self-professed “best song ever written,” “Randy The Musical” proves just how multi-faceted Bronson’s rhymes are. Take, for instance: “city lights shine bright on my complexion / self-reflection / red hairs flashing at the intersection / life is green light / one star, no script / supporting actors / fresh peaches, no pit.” What’s so brilliant is that there’s a mini-story being told here, but the general narrative arc is totally shrouded in poetic words and half-truths, which leaves it all open for personal interpretation. But again, there’s the trademark self-deprecation of the “script” bit, and more nerdy word shenanigans with the connection of peaches and Brad Pit(t). Bronson makes you laugh, smile, and nod along, all while delivering so much more to those willing to listen.

“Bathtub 8 Feet Deep” is a great addition to Bronson’s story songs, a tale of a beautiful woman who comes over to engage in carnal pursuits involving a ceiling-high tub. While the nature of the song isn’t exactly new or refreshing, Bronson manages not to get lost in himself, weaving a tale that sets up the plot and does its best to get right to it. Even with the hokey lines talking about wanting a woman with a mouth like Ms. Pac-Man, they don’t take away from song’s solid structure. Interesting wordplay is often the icing on the cake, but this is the main course, the proof of what he can do in the rap kitchen.

Bronson’s built his career not on his emotions, but on slinging words together to make us laugh and shake our heads, painting himself more as a caricature than a real person. With album standout “Bitch I Deserve You”, we see more of Bronson’s inner life, finally revealing his love and dedication to the rap game as not just some hobby or happy accident; rap is his mistress and life’s guiding force. Again, the man plays aloof like James Dean, but if he’s going to really step up and be something substantial, he’s going to have to be weak and vulnerable at times. The track is a great balance of that dichotomy without his brash personality getting completely lost to displays of humanity.

While he’s had smash collaborations with Tommy Mas, Party Supplies, and even Statik Selektah previously, Bronson seems to find more of a kinship with The Alchemist. That connection is why tracks like “Michael Vick” and “Gateway to Wizardry” work: the ’70s orchestra samples mesh with Bronson’s tone and pacing, and they feed off of each other like Bronson’s almost the lyrical manifestation of Alchemist’s sonics. Props go to the guests as well, Evidence and Ag Da Coroner keeping Bronson sharp by helping him create the aural landscape he’s got up in his melon, and Schoolboy Q’s verse on “Demolition Man” is one of the best verses Schoolboy has done all year.

“It’s all competition at Alc’s house. You want to be the best in the house”, he told us recently in an interview. Maybe that kind of camaraderie and interplay is what Bronson has needed for his big career evolution. It’s not that he needs a babysitter, or someone to hold his hand, but his style and approach lend to collaboration really well. With them, he can gain strength in the spitballing and refining that comes with working with talented, dedicated individuals. The man’s got all the skills and charisma in the world to make it, and Rare Chandeliers proves that he’s on his way to laying the smackdown on the industry in the very near future.

Essential Tracks:  “Randy The Musical”, “Bitch I Deserve You”, and “Gateway to Wizardry”