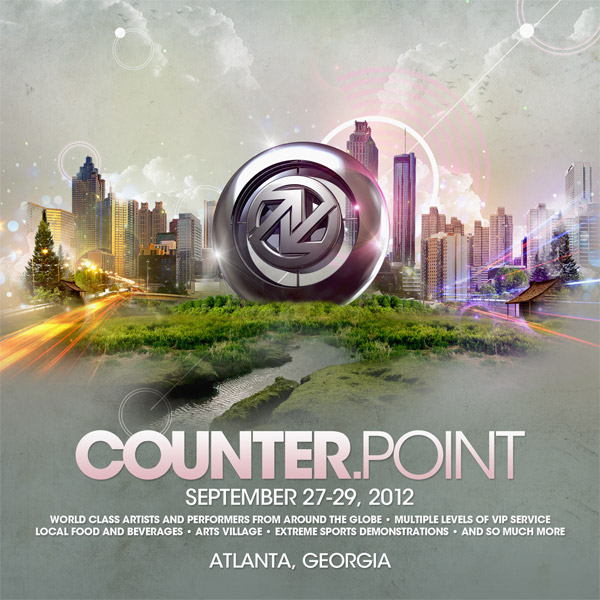 For its inaugural year, Atlanta’s Counter.Point Music Festival reeled in around 18,000 festivalgoers, which included not only hometown festivalgoers but outsiders from Chicago, Pittsburgh, Los Angeles, and even Cape Town, South Africa. So, yeah, pretty much a success.

Not like it was hard, though. Headed by Skrillex, Pretty Lights, Avicii, Bassnectar, and Steve Angello, and working off an undercard that included ATL’s own Big Boi, Big Gigantic, Atmosphere, MiMosa, and Wale, the whole thing had success scribbled all over it. Truth: Electronic festivals are a dime a dozen these days, but fans are schilling out far more than that, and multiple times. Counter.Point capitalized on that market, but to good measure.

Everything felt like a festival. Those looking for the full weekender experience were able to camp out in the 350 acre field surrounded by the Chattahoochee River for an extra $15 fee. Campsites were divided by west and east, all depending on what time of the day people arrived. The grounds itself consisted of acres of hilly green meadow, decorated with graffiti artwork billboards, carnival rides, and a giant Counterpoint sign in the distance. Albeit treacherous to hike up and down at times, the hills that outlined the walk between the main stages and the tents provided the much-needed natural element missing in today’s crowded market.

Like many of this years festivals, including Lollapalooza and Las Vegas’ Electric Daisy Carnival, Counter.Point was forced to shut down due to severe weather. On Friday, the festival evacuated the grounds at 3:30 p.m., asking everyone to take shelter in their cars. Unfortunately, many that werent expecting the rain had left their campgrounds ill-equipped for bad weather. Canopies were flipped over and rain flies were strewn all over the ground in the wreckage from the rain. The heavy beatdown lasted only 15 minutes, but resulted in the cancellation of a few sets, including M83, Lance Herbstrong, and Street Lurkin.

Problems aside, Counter.Point offered enough unique notables – Porter Robinsons set (which sadly overlapped with Pretty Lights), followed by Ghostland Observatory, who had the crowd mesmerized by their laser light show — and one hell of a dance party – Zedd ended Counter.Point with Skrillex, Porter Robinson, Zeds Dead, Pretty Lights, and a few others — to stick to the back of many a festivalgoer’s memory bank.

For those that couldn’t attend, or can’t jog a memory or two, here are some photos as supplements.