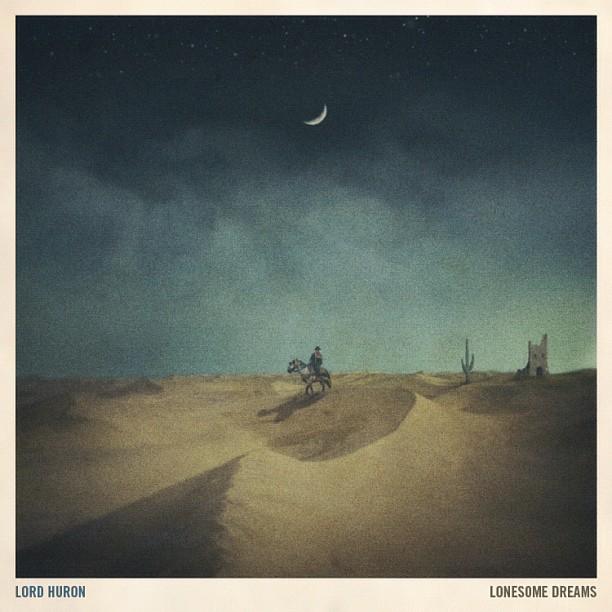 Lord Huron’s Ben Schneider hails from Michigan and lives in Los Angeles, but he seems to have been everywhere. His impressionistic, world-bent Americana plays out like a foggy map of the earth, cluttered with pins and photos to mark the various places that inform it. There are pictures of festival parades in China (“I Will Be Back One Day”, “The Man Who Lives Forever”), a portrait of Jim James near Kentucky, shots of Scandinavian winters up north, a drawing of the Lion King’s ‘Pride Rock’ somewhere in Kenya, pictures of Jamaica’s steel drums clinging to their island shapes or Josh Ritter poking out of Iowa, etc. All of these sounds come together with grace, over acoustic strums and smoky vocals. It’s all very clean, well-balanced, and to the point. It’s pleasant, not chaotic — a distant memory of a revelatory experience, and not the primal, confused excitement of the journey itself. The clean-cut nature of Lonesome Dreams is one of its greatest strengths, but also its fatal flaw.

Problem is, Lonesome Dreams‘ big visions are perhaps not all that big to begin with. Even with the cultural grandiosity described here, in many ways, Lord Huron’s music is pretty standard Americana fair: catchy twang through a hazy lens. It’s pleasant, it’s pretty, but these various sounds and influences are more like sprinkling spices onto something that’s already been cooked. At its core, Lonesome Dreams is a folk-rock record, just really well seasoned. There are standouts, of course. Opener “Ends of the Earth” argues for these worldly sounds coming together. It’s big, it’s propulsive, and it explains the overarching themes quite well: “This is a big world, there’s a lot of love to give, let’s explore both of those things together.” And “Lullaby” is what happens when you turn Feels-era Animal Collective into country music. Lonesome Dreams wants to show you the world. In some ways, it travels too far. In others, it hasn’t left home.

Essential Tracks: “She Lit a Fire”, “Ends of the Earth”, and “Lullaby”