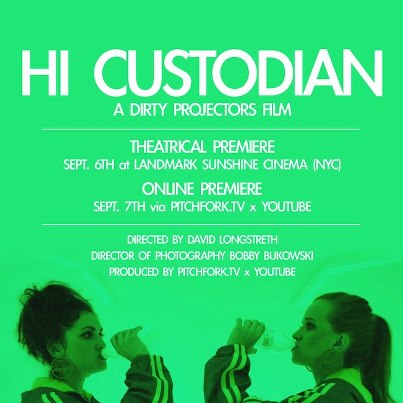 Dirty Projectors have released their new short film Hi Custodian, and you can watch the entire 20-minute piece below (via Pitchfork TV). Written by frontman David Longstreth, the film was shot last April at various locales in Southern California, and explores the concepts of spiritual death and rebirth as experienced by a strange cast of characters in a surreal landscape. Amber Coffman plays a lost searcher, Nat Baldwin a truck driver, Haley Dekle a sister Fate, and Longstreth pulls double duty as a yokai (a shapeshifting undead spirit from Japanese folklore).

The film features music from the band’s latest album, Swing Lo Magellan, including the title track, “Offspring Are Blank”, “About to Die”, “Gun Has No Trigger”, “See What She Seeing”, “The Socialites”, and “Just From Chevron”, alongside unreleased material from the same sessions. According to the film’s producers, the project was inspired in part by Kanye West’s Runaway and Prince’s Purple Rain.