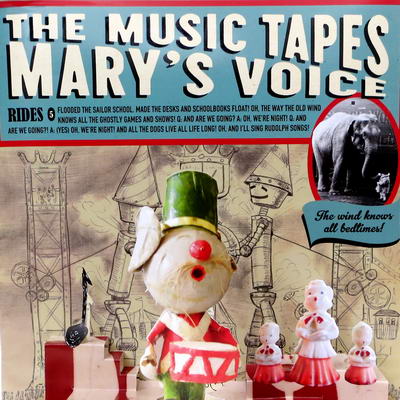 The Music Tapes have become purveyors of a particularly mournful strain of old-movie-soundtrack pop over the past few decades, although that’s hardly the extent of their bag of tricks. Mary’s Voice, the latest effort from this 90’s-era collective spearheaded by former Neutral Milk Hotel member Julian Koster, mostly fits that description. It’s the aural equivalent of a dusty old attic, rife with sounds that evoke memories of earlier times.

Mary is a patchwork of Koster’s melancholy banjo strumming, with some musical saw-playing and baritone horn thrown in for good measure. It’s not always easy to listen to—it sometimes seems as though Koster is singing to himself, and the rest of us are having the awkward experience of catching sight of him in his bedroom with the door half-open. It frequently sounds as though it’s being sung in his own secret language, making it hard for the listener to glean his secrets. This often seems to be an album made for Koster’s own benefit, and that can be a hard layer to penetrate.

One example of this is “The Big Beautiful Shops (It’s Said That It Could Be Anyone)”, which has a dirge-like quality that showcases Koster’s voice in a low, despairing wail. Driven by synths and an orchestral crash cymbal clamor, it’s unrelenting bleakness makes it a difficult listen. “To All Who Say Goodnight,” underscored by church bells and the ever-present banjo, Koster’s voice is once again the defining feature–at least until the pace picks up and the drums kick in. It’s still hard to tell what he’s so sad about, but it sounds as though it was a real bummer.

The album reaches a much-needed crescendo in “Takeshi and Elijah,” the final track. The backbone comes from what sounds like a sample of a symphony orchestra, and it supplements Koster’s tortured wail perfectly. While the rest of the album can be dangerously low-key, “Takeshi and Elijah’s” relative bombast makes you wish that the rest of the album could maintain the same level of energy and craftsmanship.

So who is Mary, and what is it about her voice that is so compelling? This is an interesting question to search for an answer to while combing through the esoteric morass of Mary’s Voice. You may not ever find one, but it’s a mystery (mostly) worth taking the time to unravel.

Essential tracks: “Takeshi and Elijah”, “To All Who Say Goodnight”