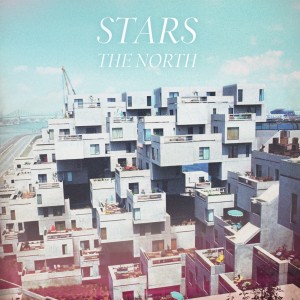 Most people get married because they want to settle down. They think they’ve found someone who they can spend the rest of their lives with, someone who will make life easier and not harder. They want contentment. There’s always a chance that things will backfire. People lie, people cheat, people fall out of love. People get divorced. But no one enters a long-term relationship because they’re looking for trouble.

When the Montreal quintet released their debut album Nightsongs in 2001, they seemed exclusively focused on love and turmoil being one and the same. They continued to dissect this thesis on their subsequent releases, albeit with more than a dose of nostalgia and death. And although the band members are now all in their 40s or pushing 40, some married with children, the romantic stakes are higher than ever. Stars continuously drives this point home on The North. Their sixth album comes as a breath of fresh air after the dreary synthetics and spectral meditations of The Five Ghosts, opting once more to focus on the need to love passionately, messily, and dramatically, this time in the face of middle-aged stability rather than the reckless abandon of one’s 20s.

This idea is present right from the opener, “The Theory of Relativity”. Patrick McGee’s electronic snare snaps into the chandelier chimes of Chris Seligman’s keyboards, immediately transporting the listener to the nightclub Nightsongs took place in over a decade ago. But things have changed. The scene has gone dormant and past friends have vanished. “It can’t be ’93 sadly/ ‘Cause I wish it could forever,” sighs Torquil Campbell in a chilled voice before mentioning how their former drug dealer is “building homes now in the new third world.” Despite the widespread dissolve, Campbell pleads for his lover to reignite him. “Now that we’re deep inside/ The wise/ There’s a place to hide/ You can do things they would’ve never dared.”

The yearn for high-soaring feelings continues on “Do You Want To Die Together?”, a signature duet between Campbell and Amy Millan, and the album’s emotional apex. Voices entwined, the two singers subvert the 1950s love song, trading promises of eternal devotion over a tenderly upstroked guitar that would fit in at any small-town prom. Things come crashing down in the chorus as the chords become big and distorted and ugly, the couple agreeing on self-termination to preserve the magic of their relationship. The chaos seamlessly melts into “Lights Changing Colour”, a solo number from Millan that jumps forward three decades with ’80s ether.

The only time Stars veers away from the topic of catastrophic romance on The North is during “A Song Is A Weapon”, a majestically angry gem that kicks off with a quote from Woody Guthrie. But even when tackling politics, the band does so with a personal touch. The lyrics “…And you will be here ages after I’m gone/ I can only hope to kill you with a song” could just as easily be directed at an ex-lover as they could a president or a dictator.  And in many ways, that type of anger is the same thing; a sense of being betrayed by someone you once trusted. In Stars’ music, the way you love isn’t much different from the way you see the world, and Campbell’s style of indignation is both fiery and vague enough to resonate with an array of listeners, regardless of whom they voted for.

Essential Tracks: “Theory of Relativity”, “Hold On When You Get Love And Let Go When You Give It”, and “A Song Is A Weapon”