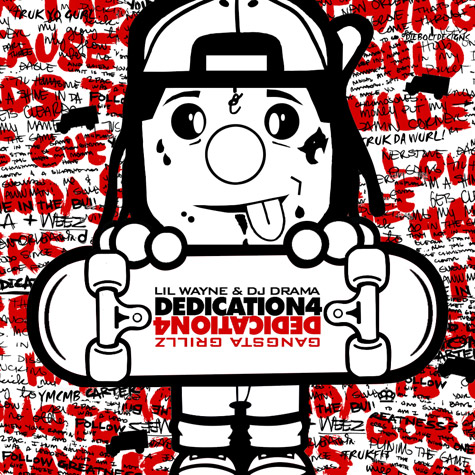 Always and forever, 2007’s Da Drought 3 is Lil Wayne’s best mixtape. The reasons for this are innumerable, but many of them have something to do with focus. Though 100 minutes and 29 songs in length, the tape has maybe an ounce of filler, making room for little except the biggest beats of its era (“Crazy”, “Throw Some D’s”, “Show Me What You Got”) for Wayne to just ravage through. Which, of course, the then-24-year-old took full advantage of: Through innumerable batshit similes, sports references, and disgustingly awesome cunnilingus-centric punchlines, the NOLA native made his claim of being The Best Rapper Alive sound almost valid.

Listening to Drought 3 back-to-back with the new Dedication 4, flaws with the latter become pretty apparent. For starters, the songs here don’t feel as fully germinated as they should; Wayne’s never shown any supreme sense of song structure, but there’s no question that practically any Drought song sounds miles more organized than, say, the version of “No Lie” found here. And, despite the delightfully anachronistic insertions of “SpottieOttieDopaliscious” and G. Dep’s “Special Delivery”, the beat-sampling of 4 – also featuring Future’s “Same Damn Time”, Rick Ross’s “So Sophisticated”, G.O.O.D. Music’s “I Don’t Like” remix, among other zeitgeisty Southern-rooted bangers – isn’t varied enough to stay interesting throughout.

Even so, this tape is full of some of the Wayne-iest zaniness ever committed to DatPiff, and unless you’re easily offended or insistent on the idea that rap needs to be about something to be worth listening to, 4 can be a pretty great time. From “Same Damn Tune”: “Her clit look like a jellybean / I’m on that promethazine / Blow your ass to smithereens / Kush strong like Mr. Clean.” From “Burn”: “Money talks, bitch, and mine talks Robin Leech / That lean got me slow as Lisa Turtle / Ask Screech.” From “Amen”: “My ver-dick hung like a jury.” The most common criticism of Wayne right now – which is to say, post Tha Carter IV and Sorry 4 the Wait – is that he’s losing interest in rapping altogether, but there’s enough lyrical rabidness here to stave off such an idea, if only slightly. The Dedication series, after all, is named as such because its installments are supposed to show how firmly committed (er, dedicated) Tunechi is to his craft.

As with any other Wayne project, there are questionable moments here. On closer “A Dedication”, Wayne talks about how he “built a skatepark to get them kids off the streets,” but just a few tracks earlier he allows 13-year-old Chicago rapper Lil Mouse to glorify a “.30 clip of them hollow tips.” Not a good look. Then, on the J. Cole-featuring “Green Ranger”, Wayne says he “[doesn’t] even like this beat,” which, why the hell would you put a beat that you don’t like on your mixtape? And, of course, we get a few lines here and there that just don’t even make sense even with a Weezy filter: “My homie T roll up my blunt / Skinnier than Rex Ryan.” Um, Weezy, even after the lap band surgery, dude still isn’t that trim! Still, a Wayne mixtape can only be so bad, and Dedication 4 isn’t exactly an all-time nadir. For all its flaws, this tape still stands as evidence that Dwayne Carter isn’t falling off as much as you might be hearing about.