Dave Matthews Band – Away From The World 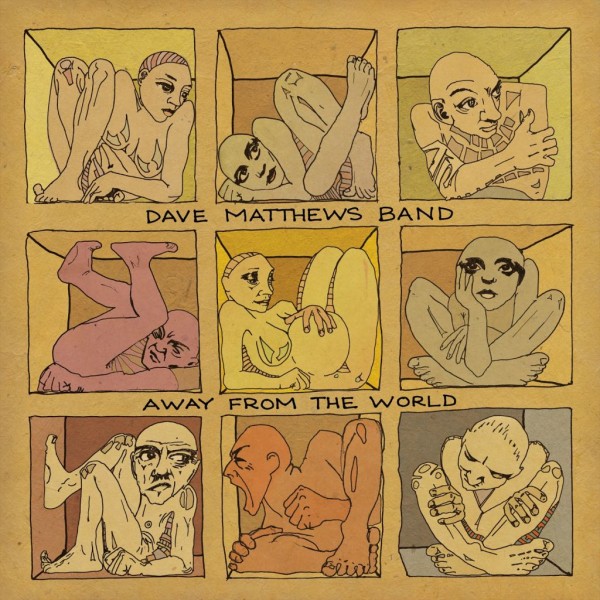 The musicians of Dave Matthews Band have always been exuded talent, but somewhere along the line, the band became a punchline for snarky pundits everywhere. After 20-plus years spent producing seven studio albums, countless live discs, and touring extensively, how did DMB become a band scorned, the love of which is readily attributed to frat boys and hippies?

In the interest of full disclosure, I must confess that DMB was my favorite band in high school. My heart was stolen by 1996’s Crash, and I’ve never fully recovered. But even a long-time fan like myself had trouble with the overbearing grandeur and multi-guitar melodies that gradually began to clutter up the band’s sound, reaching a climax with 2009’s Big Whiskey and the GrooGrux King. Add the untimely loss in 2008 of founding member LeRoi Moore, and this former acolyte, like many others, had drifted. Even 2011’s hugely successful Dave Matthews Band Caravan — curated by Matthews and featuring bands ranging from Edward Sharpe and the Magnetic Zeros to Sharon Jones — wasn’t enough to restore the band’s rep. To wit, I got to see Flaming Lips play The Dark Side of the Moon — and people still mocked me for attending.

It is with joyous heart and grateful spirit, then, that ardent DMB fans will receive Away From The World. And those of you who snicker at that statement? You’re missing out on some of the best musicians of our time. Here is the sound that the nineties fell in love with, grown and pruned into a mélange of subtle guitar work and stunning interplay from an ever-increasing number of musicians that manage to sound like an intimate few.

One factor in the return to a simpler sound is the band’s reunion with producer Steve Lillywhite, who was responsible for the band’s first three (and critically-commercially beloved) albums. Despite having more players in studio than ever, DMB manages to sound stripped down — and more like itself than it has in a long time. That DMB sound is exemplified on opener “Broken Things”, which also features some of the fattest saxes you’ll find here. The band’s decision to leave Moore’s signature solo lines out of future compositions means that new saxman Jeff Coffin’s role is more about shading than illuminating. In addition to Coffin and the remaining four original members, DMB has also officially added Tim Reynolds on guitar and Rashawn Ross on trumpet. But in Lillywhite’s hands, the sound remains uncrowded, Matthews’ vocals brought to the center. “Oh my love/ my heart is set on you,” he croons, trailing off into a soaring violin solo from Boyd Tinsley, and all of a sudden it’s 1996 again.

The album is not without its flaws. Tracks like “Belly Belly Nice” and single “Mercy” do nothing to stand out from the wide selection of just-fine tracks that DMB has produced by the dozen. A more worldly-than-thou vibe is present on “Gaucho”, with trite lyrics like, “Gotta do much more than believe/ if we wanna see the world change.” Though presumably well intended, it comes across as just another celebrity PSA.

But it’s a pair of acoustic stunners, “Sweet” and “Belly Full”, that display the band at their finest, with Matthews’ voice skimming over barely ornamented guitar. “You know the feeling when you’re in too deep/ you know you make it out/ the taste so sweet,” he sings on the former, while the latter moons about “all my dreams and all the world/ just for you my love.” Both harken back to Matthews’ days as one of the suavest panty-droppers to caress a microphone (particularly “Crash Into Me”, where the lines “Hike up your skirt a little more/ and show your world to me” ride the extremely thin line between sexy and creepy). “Sweet”, in particular, stops the heart, Matthews’ voice sustaining a delicate, seemingly impossible apex. By pulling away all the layers of guitar and production, Dave Matthews Band has unearthed a simple truth: these are genuine craftsmen.

The instrumentation throughout is flawless, with careful guitar, exacting percussion, and funky violin swirls all blending into that signature Dave Matthews Band sound. Frankly speaking, the skill evinced here is undeniable. That said, haters gonna hate, but music lovers of all stripes should find plenty to love on Away From The World –– providing they drop the pretense and give it a chance.