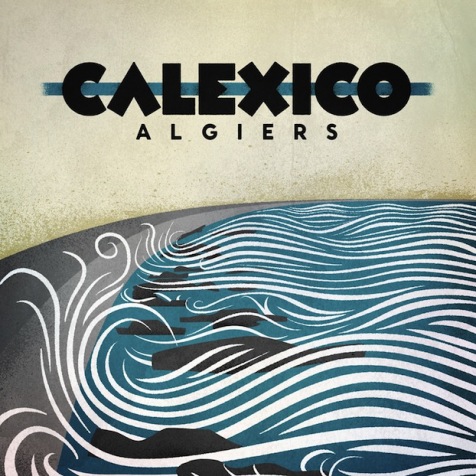 After my grand awakening regarding Arizona’s musical promise, I visited some of the state’s more well-known bands to further enrich my newfound appreciation. The most notable of those acts was Tucson folk-rock band Calexico. Over 16 years and six full-length LPs, they’ve created a legacy as the quintessential Arizona band, deftly mixing together Shins-esque indie, post-rock, folk, blues, Americana, alt-country, and a healthy portion of mariachi and Tejano music that both defines the state’s musical identity and acts as a cultural signpost. Their latest album, Algiers, sees the band trying to further hone the accessibility of 2008’s Carried to Dust; however, what once was a quiet intensity is now an album too splintered and fractured for meaningful consumption.

Despite the myriad influences, the band has usually been able to tie everything together into a neat, evocative package. The majority of Algiers‘ offerings, on the other hand, only present musical constructs/concepts that, at most, could be considered frayed strands. The jangle of acoustic and dreamy electric guitar in “Epic” create a striking dichotomy; the pitchy synth of “Sinner in the Sea” is a gorgeous constant for the smoldering, folklorico guitar groove; the title track takes on a smoky, Moroccan vibe, complete with the gentle rattle of drums and hazy accordion; and “Hush” appears to be a weepy folk-rock tune, but the addition of a low-level, swirling hum hints at something more abstract and intriguing.

But as it stands, these are mere portions, small chunks of everything required to make a truly good song. Rather than “good,” these tracks are just interesting and alluring enough to keep the listener engaged until the album’s close. Sure, their morsels are more satisfying than some other band’s entrees, and something should be said about how impressive it is that, even at their least complete, the band can keep their listener’s attention. But, in the end, this effort often feels like a purposeful ruse. You sit and wait for the grand release of emotions and sounds, surviving off sonic crumbs, but nothing ever comes, and you leave more starved than before you even started.

It’s not all a giant tease, though. In terms of offering more substantive pieces, the band delivers (though perhaps less than they are capable of) when they mix up the process of synthesizing their countless influences. “Maybe on Monday”, like “Hush” and others before it, starts life as a rather unassuming alt-country hybrid. But where the others never really got off the ground, there are tinges of outlaw country (courtesy of that cold, extra steel-y guitar) and a more pronounced sense of experimental ambiance. It’s the same formula, but the emphasis on how the pieces fit together differs. Each part is made sharper, and the whole becomes that much more appealing.

Similarly, “Puerto” works because its corresponding formula is tinkered with in a decidedly simple, yet impactful manner. As throughout their established career, the band doesn’t merely infuse an indie rock song with Mexican influences, they sprinkle a traditional Mexican folk song, complete with images of Mayan-Aztec battles and forlorn senoritas, with the sounds of lush rock guitars and an air of dark uncertainty. The halves struggle for control, giving and receding in essentially equal parts, resulting in a number that portrays cohesiveness without snuffing out the precious dramatic tension.

Part of what makes those tracks’ nuanced shifts work is that so many of the others, those tantalizing strands, sound so much alike. It’s not necessarily one indecipherable blob, but the majority of the album falls too far in line with itself: slow-building songs with flourishes of instrumental passion, vocals focused with disappointment and intent. But rather than build to some grand notion, or perpetuating contextual or sonic proximity for the sake of presenting a united effort, it just feels like they’ve got fewer ideas to work with this time around. Because of that, it makes the few tunes that are even slightly altered sound absolutely fresh and vital.

Blame the LP’s issues on minor stagnation on the band’s part, an inevitable occurrence from nearly two decades of making music together. Or, maybe the group is just slightly rusty after not releasing a proper album in four years (though there was 2010’s Circo soundtrack). Either way, aside from a few brief, shimmering moments, Algiers is sort of like the Grand Canyon: it may have some enjoyable attractions, but in the end, you’re just staring at a giant hole.