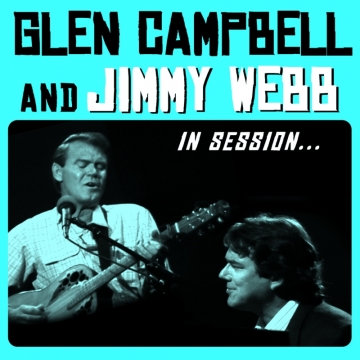 For years Campbell recorded Webb’s songs — specifically, “By the Time I Get to Phoenix, Wichita Lineman, Galveston, and Wheres the Playground Susie — and the two worked closely together to carve out a number of hits later on. Yet despite this close relationship, and their countless performances together, any live recordings between the two have been quite rare.

That’s what In Session plans to rectify. On this particular recording, Webb and Campbell perform behind the piano and guitar, respectively, knocking out the aforementioned favorites, including bonafide rarities like the only known recording of “Sunshower”.

The CD/DVD collection stocks other goodies, too, including a version of Webb’s “MacArthyr Park”, The Moon Is a Harsh Mistress, and Still Within the Sound of My Voice. What’s more, excerpts of an interview with Webb bookmark various points in the release, while liner notes by Lee Hildebrand offer more context.

In light of the set, check out a recent performance of “Wichita Lineman” and “Rhinestone Cowboy” during Campbell’s heart-wrenching Goodbye Tour.