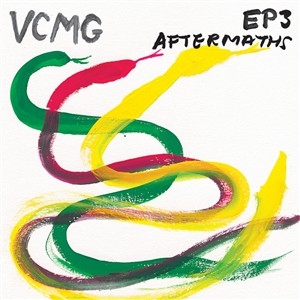 Completed via email and file-sharing between Depeche Mode masterminds Vince Clarke and Martin Gore, VCMG and their debut LP, SSSS, had the potential to be purely tangential — a shared insular moment they let slip into the collective consciousness of techno fiends. Hinting that the album would likely never be taken on the road, SSSS encapsulated the harmonious reunion of two friends that hadn’t seen each other in over 30 years. This project didn’t just recharge their relationship, it sparked producers worldwide, leading to a series of remix EPs. The newest, Aftermaths, features five significantly retouched works from renowned artists across Europe, tracks that highlight divergent skill sets while build cohesively into a glossy re-edit by Clarke himself.

After offering the original mix of “Aftermaths” for sonic guidance, the EP breaks into minimal remixes courtesy of Germany’s Alva Noto and Sweden’s Christoffer Berg. Noto, AKA Carsten Nicolai, places the track in a digital torture rack, stretching the original until it eviscerates, spewing fuzzed-out bleeps over ghostly oscillations. Berg, the producer of Fever Ray, adds a bouncing upper register, infusing the original with Noto’s German nihilism.

Gasaffelstein takes roughly 1:40 to build his track, teasing the original’s cavernous low end. But when he cues up a series of short synth strikes, the track just begs for an overwhelming laser light show. Like fellow French producers Justice and Etienne de Crécy, there is a sense of analog violence that permeates Gasaffelstein’s productions. This tension carries over into LFO’s remix, at portions baffling the listener that another track hasn’t popped up onto the laptop. LFO, who produced Depeche Mode’s Exciter under real name Mark Bell, has mastered the techno trait of hiding notes, mixing in low-end blips, then letting the samples wash out while the listener still senses the beat shuffling through the track.

In the wake of the all-star edits, Clarke adds his seal of approval with an energized take on the original — likely the most club-ready of the entire SSSS extended discography. This collection is a treat for those who dream of seeing the duo perform live on stage, but would be a struggle for fans who claim “It’s Called a Heart” as their favorite Depeche Mode song.