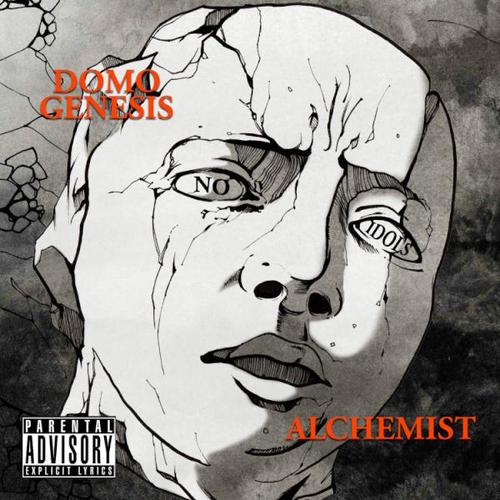 Thanks be to whomever, the focus on Odd Future has shifted from Tyler The Creator’s shock value to the b-plots of the rest of the collective. Which member has the broadest shoulders to carry their own album and narrative? Tyler and Earl Sweatshirt are now names unto themselves, as is the whole-‘nother-level Frank Ocean. Hodgy Beats and producer Left Brain keep amassing a fanbase with their own well-rounded raps in MellowHype. But Domo Genesis, who joined the crew well after Tyler, Earl, and Hodgy in 2009, never really had a schtick other than a laissez-faire attitude and a love for weed, two historic tropes of hip hop’s stock characters.

Domo now has three albums to help move him out of the shadows: Tyler-produced Rolling Papers; Under the Influence, a mixtape of him rapping over his favorite beats; and now a high-profile collaboration with legacy producer The Alchemist on No Idols. The pairing brings out the best notes in Domo, and he was wise to enlist a grip of A-list guests in addition to The Alchemist to portray himself in the best light to the end, even if the personalities on his tracks dwarf Domo himself.

By himself, the Domo does fine. He vents his angst in a quick verse– his most memorable, in fact– on “Fuck Everybody Else”, and even though it’s pretty toothless compared to the vitriol spat by other members of Odd Future, Domo just doesn’t have the kind of imagination or self-deprecation that makes Earl and Tyler so indelible. He doesn’t plumb the lower depths like Tyler, nor does he have as much fun with his words as Earl, so the incessant chest-puffing behind his self-proclaimed “alpha male” persona and all the “realness” he champions feels unearned.

But then there’s The Alchemist. His midnight, dark-alley beats couch Domo’s ineffectualness, his idling cadence, and his chilled, high-baritone. Tyler’s synth-heavy production on Rolling Papers never quite gelled with Domo’s delivery, but fits right in with Alchemist’s bass-lines that err toward the upper frets, and the musical ornaments that balance the beats underneath. They’re not quite fit for 12’s in the trunk, but the guitar riff on “Power Ballad” and the dissonant synth line on “Like a Star” fit just fine while supine in a bedroom.

Domo sparks up his nonchalance when up against heavy hitters on a track. He rises to the occasion on “Elimination Chamber” to spar with Earl Sweatshirt, Vince Staples, and Action Bronson. Domo pushes so hard that he actually runs out of breath a couple times, eventually passing the mic to a snarling Earl who commands attention in all three of his appearances on No Idols. Same with Action Bronson, whose every appearance piques attention. Domo sounds less like a snotty skater punk and more like Nas’ disciple every day, but compared to the personalties surrounding him here, he’s still just a grounding cable. It suits him well for now, and even if his lot in Odd Future is being the control group, The Alchemist pulls Domo — and his potential — into focus.