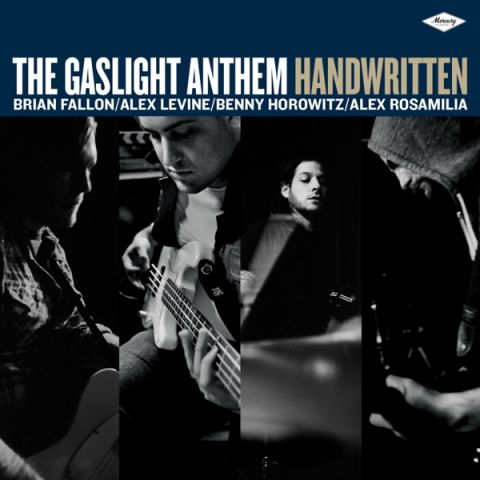 I discovered The ’59 Sound in the summer of 2010, the same summer I discovered alcohol, drugs, and heartbreak. It was an emotional time for me, and The Gaslight Anthem provided the soundtrack. Tales of small-town love and lust, Brian Fallon’s lyrics make protagonists out of regular chicks and dudes. Glamorous, song-worthy tragedies befall these characters, and although my paltry tragedies of the summer of 2010 would have made one boring-ass song, The ‘59 Sound hit home for me.

It hit home for a lot of people. Following the release of their previous album, American Slang, New Jersey’s The Gaslight Anthem amassed a fanbase so large that label SideOneDummy could no longer accommodate the band, so they made the jump to major label Mercury for Handwritten. What is it about Fallon’s songs that connects with people? Well, what was it about Springsteen’s songs that connected with people? Mellencamp’s? Westerberg’s?

They sang about us—the common folk trudging through life. So does Fallon. He romanticizes the lives of everyday people by seeing past our banalities. In a Gaslight Anthem song, we become endearing anti-heroes, damsels, and hopeless lovers. “With this pen, I thee wed/From my heart to your distress,” Fallon sings on title track “Handwritten”. He takes me back to that summer: I’m driving at night listening to The ’59 Sound, projecting myself onto the lyrics while yearning for a girl who moved away after I irrationally fell for her. Very melodramatic in hindsight, but Fallon knew my melancholy; he knew my pain. Or at least that’s what I told myself as rationalization for how ridiculously sappy I was being. Songs about those who listen to music (and those who make it) have been a running theme throughout Fallon’s career. Handwritten’s opening track “45” uses the act of flipping a record over as a metaphor for perseverance. If only it were that easy. “45” sees The Gaslight Anthem returning to the punk rock speed of its early album; however, the band only occasionally mines that sound on Handwritten. It’s a rock ‘n’ roll record through and through.

Fallon started working on this record after finishing up with his side-project, The Horrible Crowes. With sparser instrumentation, looser arrangements, and bluesy rhythm, The Crowes sounded like Gaslight Anthem via early-Tom Waits. This sound rubs off on more than a few songs on Handwritten, undoubtedly the strongest tracks here. On “Here Comes My Man”, Fallon’s melodies intertwine with jangly guitars. And they’re fine melodies—some of the finest he’s ever written. When he sings, “Oh sha la la, listen honey, here comes my man,” you hear Fallon as a soul singer, one with control over every nuance in his voice. He’s come a long way since the raw ferocity of Sink or Swim. On “Too Much Blood”, his vocal range resembles Chris Cornell; it comes out of nowhere and snatches the ear. Again, Fallon pens meta-lyrics– a song about writing a song that’s too personal. Guitarist Alex Rosamilia warrants mention here, as he lashes out with southern rock twang and a short-but-sweet guitar solo.

Handwritten has heart, but musically, the band’s lost its edge. For all of the classic rock inflections pouring out of these songs, Brendan O’Brien’s production works well, providing a sheen that brings out the rasp in Fallon’s voice and the tone of Rosamilia’s guitar. But there’s too much sheen. On past albums, The Gaslight Anthem played with dirt under its nails, like a garage band. Handwritten sounds tame in comparison. When the band reaches punkish tempos (“45”, “Howl”, “Desire”), the guitars sound restrained and controlled; they no longer sprint and dance like they did on The ’59 Sound. An indie-label punk band recorded that album, while a major-label rock band recorded this one. We’ll leave it at that.

Although the band sounds like it’s holding back, Fallon sings with passion and gusto. He makes you feel something. When Fallon gets nostalgic, you get nostalgic. When he sings about passionately embracing his lover in a dark parking lot, pressed up against a car, you think about that one time you held someone close against your first jalopy. Fallon is just a guy like you and me, and that’s something universal we want in our idols, rock or otherwise. Handwritten houses some of Fallon’s strongest compositions to date, and while it ain’t punk, neither is The Gaslight Anthem. They’re full-on heartland rockers.

Essential Tracks: “Here Comes My Man”, “Too Much Blood”