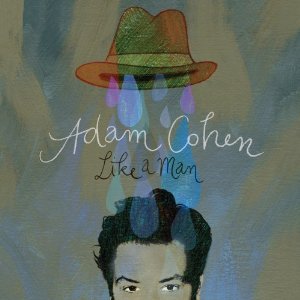 When the child of a celebrated musician puts out an album, listeners are both intrigued and dubious. Is the progeny actually talented—or just born with connections? Fortunately, Adam Cohen’s got the chops for artistry, his relationship to that other Cohen (father Leonard) aside.

From the first track, Adam Cohen’s voice draws the ear as readily as it draws comparisons to that of his father. His pipes, channeling a velvety, nuanced tenor, are his greatest asset, and while he’s identifiable as his father’s son, the resemblance isn’t distracting. The younger Cohen indulges that voice in romantic leanings on Like A Man, to mixed effect. This is definitely a pop album, sweet and melodious though it is, and some of the tracks swing too mass-market for their own good.

Tracks like “Sweet Dominique” and “Overrated” are blithely romantic, and “What Other Guy” plays the romantically observant/ creepily sexual line a la John Mayer (“I know where you go with your beautiful friends/ I know what you taste like when the night ends”). “Beautiful” starts out more thoughtfully but is ruined by Cohen’s use of the phrase “Willy Shakespeare”. Shortening his name like he’s a modern-day bro is juvenile at best, not to mention the horrid teen pop it conjures.

Like A Man has its bright spots, though. Lead track “Out of Bed” most directly evokes the family sound, leaving the sweet-but-moderate lyrics nearly bare. The song also gifts us a more realistic protagonist: He’d do anything for his love, but “I can’t get out of bed.” A softly winding, emotive track, “Out of Bed” is Cohen at his best, and those characteristics are echoed on titular “Like A Man”. “I don’t wanna/ I don’t wanna be like that”, he repeats, aching to be better than society expects of him. “Stranger” swings philosophical: “Everybody’s a stranger/ everybody’s just passing through,” Cohen intones over a slow, countrified background before invoking that famous line, “Look at all the lonely people.” It’s an old idea, but one that rings authentic, and Like A Man could use more of that.

While Cohen’s press release calls this album “strikingly personal,” it’s hard to say one knows him better after listening. It’s clear that he’s got a tremendous voice and the genes for success, but cringe-worthy lyrics are sometimes a drawback. But hey, Mayer’s been successful with the same recipe. If Cohen can avoid Twitter scandals, maybe there’s a spot for him, too.