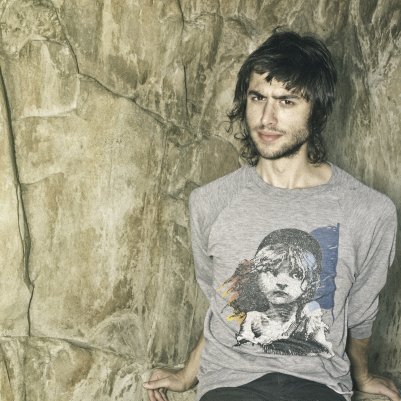 Daniel Pujol (or simply PUJOL, pronounced with a “hard J” unlike the baseball player with the same last name) just dropped his exciting debut album, United States of Being, a lo-fi aggressive bluesy/garage starter pistol for his career. His playlist sticks to the simple rock classics, but his thoughts on each song will make you see some of these standards in a new light. Check out his playlist on Spotify.

“Rockin’ in the Free World” – Neil Young
Do you ever feel like there’s some VH1 corporate rock history that alienates songs from their context and intent and trap them in soda cans and burn the dictionaries?

“Neighborhood Threat” – Iggy Pop
Iggy Pop is a great example of that. Before watching now-removed interviews with him on Youtube in 2007, I never anticipated he’d be such a howling lyricist; just the peanut-butter guy. More idea than human.

“Rock & Roll” – Velvet Underground
There is a spirit to this song that’s somehow been inverted over time, but it still groovily lurks in its shadow.

“Tumbling Dice” –  The Rolling Stones
This recording sounds like a painting. Josh Gillis would say its like Cubism because its trying to show you everything at once. You can’t touch it, but it’s looking at you look at it.

“Streets Of Fire” – Bruce Springsteen
This is the type of song that dignifies a fragment of life (a painfully anonymous epic) but it’s private and around everyone all the time. You’ve granted it time and it is gracious. It still wants a human to be with. The song is not just looking to cast characters in its life-play. It’s inviting you because it won’t bail. Make and break eye contact.

“God” – John Lennon
It would be scary and horrifying to expect anyone to be right all the time. Like a one-dimensional peanut-butter guy.

“God Part 2” – U2
It would be even scarier and more horrifying to be right all the time. Real life’s too 4D for peanut-butter guys.

“Baba O’Riley” – The Who
The abstract can be a lonely place. It never manifests perfectly. It’s just approximation, people, and placenta. You can share your best with someone else who wants to know. You can only control yourself.