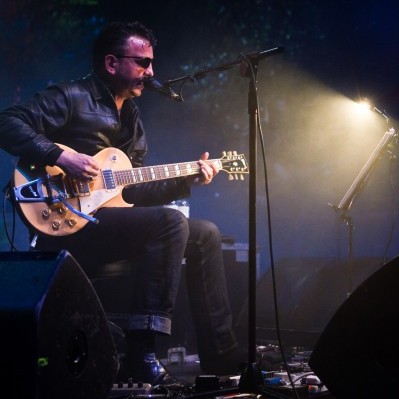 Originally built as an art deco cinema in the ’30s, the HMV Forum in the North London district of Kentish Town has served as a music venue for the past 30 years. It holds well over 2,000 people in a cavernous space split across two floorsstanding room only downstairs and a raked, seated balcony above. Between the two there is a vertigo-inducing void that presents a clarity challenge for any sound engineer. Décor-wise, there is an air of dull opulence about the place; it’s great if you like your blues, golds, reds, and browns, and scenes from Roman life on your walls.

Opening Friday night for Richard Hawley was curious surf instrumental quartet Y Niwl. With just one microphone onstage (set above the drum kit to pick up the cymbals), the impossibly young-looking Welshmen eschewed the spoken or sung word. The band came on unannounced and left similarly after a tight short set of slick guitar tunes augmented by snatches of keyboard. It was hard to tell if the audience knew who the band was, let alone how to pronounce their name (Uh Nule, if youre worried). Guitarist Alun Evans, though, should at least get a wee bit of credit for his gestured efforts at aprÃ¨s-song communication, while his colleagues just got on with the job. Music like this is about as unpretentious as it comes, but is best experienced in short, sharp bursts, just like Friday night’s set.

The sold-out venue had filled up by the time Hawley took the stage to kick off with the title track from his new album, Standing at the Skys Edge (though there wasn’t much actual kicking, as Hawley had broken his leg and came on in a wheelchair). The singers self-deprecating humor kicked in immediately as he confessed that, rather than being out of his head, his leather-soled feet had slipped on a marble staircase, after a kids party. His patter between songs was disarmingly honest, warm, and witty throughout, while his incapacity didn’t extend to his fingers, as he put down some searing guitar during the opener. The stage set resembled a forestor the Hawley Garden Centre, as the artist dubbed itcleverly backlit to add drama, but later dulled by overuse of the ubiquitous smoke machine.

Accompanied by his four-piece band and two female backing singers, Hawley produced textbook renditions of songs from his last four albums, performing the latest nearly in its entirely. The new material stood up well alongside some older favorites. While occasionally masked by the ramped-up sound, Hawleys vocal was as richly mature as it is on record. His first encore, For Your Lover Give Some Time, was as moving a moment as you could wish forevery syllable teased and tenderized. Simply accompanied by Shez Sheridans guitar and John Triers piano, the song reminded that few rival Hawley for vocal purity.

The song choice reflected the variety and range of Hawleys songwriting, with beguiling melodies such as Seek It, Soldier On, and Before skillfully woven in between big production numbers like Tonight the Streets Are Ours and the intense, elemental power of Down in the Woods, which concluded with a stunning solo. While Hawleys guitar work is naturally the instrumental focal point, the rest of the band had their moments, as well. Sheridans steel guitar on Soldier On was particularly effective, while Dean Beresfords percussion was always sympathetic and mostly understated.

Remorse Code (from 2009’s Trueloves Gutter) was a personal peak. The drug-damaged life visited in the song is touched with a rarity of feeling, while the song itself never falters over its ten-minute course, its blissful melody gently explored and punctuated by explosions of Hawleys elegiac guitar. It was never bettered over an evening of standouts, though a climactic telling of Coles Corner standout The Ocean (with its Hawley signature phrases) came very close. As Hawley exited in a wheelchair, with a glass of red wine in hand and a modest thumbs-up in the other, it was clear he’d found the evening as memorable as the assembled crowd had.

Set List:
Standing at the Skys Edge
Dont Stare at the Sun
Hotel Room
Seek It
Tonight the Streets Are Ours
Soldier On
Lady Solitude
Leave Your Body Behind You
Before
Open Up Your Door
Remorse Code
Time Will Bring You Winter
Down in the Woods
Encore:
For Your Lover Give Some Time
The Ocean