PUJOL – United States of Being 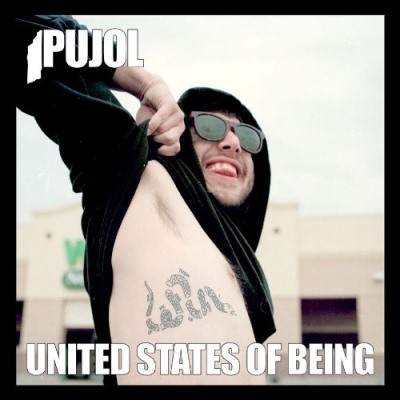 For diehard/compulsive Third Man Records followers, a quarter of Nashville-based PUJOL’s United States of Being is nothing new, considering standout track “Black Rabbit” received the Blue Series treatment, and two others appeared on a Third Man Live EP in 2010. The context of an album and a deal with Saddle Creek breathes fresh life into ballad-like “Endless Mike” and pit-inducing “Mission from God”, though, and United States offers the best glimpse yet into frontman Daniel Pujol’s head. It’s a good place to be.

Listening to opener “DIY2K”, it would be easy to pigeonhole the record as a politically charged commentary on consumer society. This would be a misjudgment, as he insisted in an interview last year with CoS and explains in later parts of the album. The growling, near-shouting vocals offer thoughtful meditations on love, religion, and life–with dashes of wit and literary references sprinkled in for good measure. “Over-the-counter culture,” “my-deology,” and allusions to Robespierre are particularly entertaining, yet the deeper lyrical level that toys with captivity as an opportunity for freedom (“building up a cage, to keep us free”) is where the gold lies.

Musically, United States doesn’t venture too far from generic conventions: each song’s pounding drums, vocal delivery, and blistering tempo are similarly executed. PUJOL takes the advice of their own lyrics, though, and finds opportunities within this set framework to be creative. Prime examples of this include the subtle keys on “Providence” that add levity to otherwise weighty lyrics (“God is pumping me all full of lead”), and the handclaps that make “Each and Every Day” all the more catchy. It’s a formula that works flawlessly to accentuate the lyrics, yet keep the overall sonic quality so high that there’s no weak track.

As closer “Psychic Pain” fades into fuzzy oblivion, it becomes clear that United States of Being is the appropriate soundtrack to both an existential meltdown and a rowdy, beer-heavy night out-or maybe both at the same time. It’s in this precarious balance that PUJOL has hit a stride that shows no intention of slowing down.

Essential Tracks: “Each and Every Day”, “Black Rabbit”, “Providence”