Hot Chip – In Our Heads 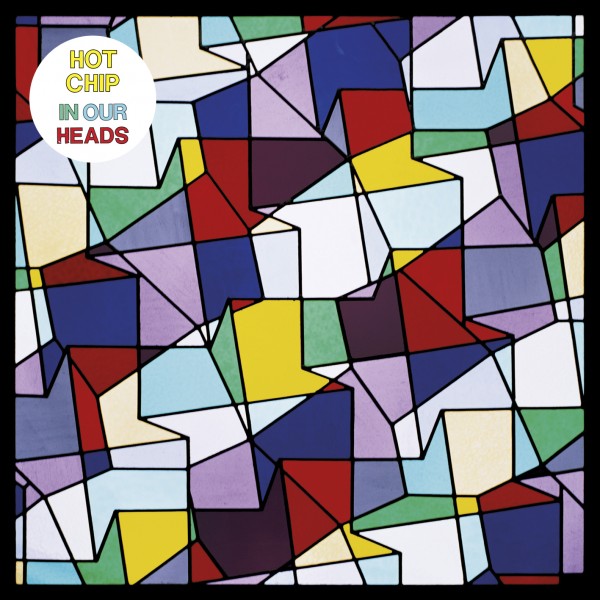 If we’re not including Hot Chip’s collaboration with Peter Gabriel for a cover of Vampire Weekend’s “Cape Cod Kwassa Kwassa”– at least, not initially– the band’s multiple personalities are perhaps best represented by Reggie Watts and Lara Stone in the video for “Night and Day”. On the one hand, you have Watts’ inimitable sense of humor (say, “The Ass Attack” off 2004’s Down with Prince EP); on the other, you have a sleek, chic supermodel (One Life Stand’s “We Have Love”, for example). Their historical juxtaposition of “vintage Hot Chip” discordance, alternately tongue-in-cheek and somber lyrics, and beats that could burn out a dopamine junkie reaches Stone and Watts’ eventual yin/yang synergy more often than not. Sometimes, though, the odd Hot Chip track has been known to crash and burn like their conjoined spaceships in the no-man’s-land between catchy-ness and experimentation, one that rose-colored former labelmates LCD Soundsystem consistently filled.

Most of the London electronic outfit’s fifth album, In Our Heads, fills the perfect middle dance floor between their disparate influences, which range from Luther Vandross to Nightlife Unlimited to, of course, Prince. “These Chains” bops effortlessly along to a 1-2 step b/w vocoded samples that echo Deep Forest’s ethnic electronica, while on “Flutes”, co-vocalist and frontman Alexis Taylor commands his band and their audience to “work that board/ Work the floor” for a masterpiece of emotive house that’s already number three on my Top 25 Most Played. After that, however, starting with the appropriately titled “Now There Is Nothing”, the album plateaus. The ambient children’s sounds that fit so naturally on “Flutes” simply sound contrived on “Let Me Be Him”, or maybe they just can’t compare to the seven-minute floor-filler at the heart of the album. Regardless, In Our Heads‘ last third lets down what would otherwise be Hot Chip’s best effort to date.

The first eight tracks play out like one of Taylor’s DJ sets, like “you’re just choosing favorite records that someone else had to make… choosing stuff that you are inspired by.” The difference is that one of Hot Chip’s notoriously bangin’ DJ sets would, ironically, probably be even better if they played their own material from In Our Heads instead of something that someone else had to make. This is to say the first half or so of the record already stands the test of time, something a DJ might pull out of the crates to get everyone out of their seats for their forgotten favorite song from a specific era.

“Don’t Deny Your Heart”, for example, channels Chic’s early ‘80s disco-fied funk bombast (probably because co-frontman Joe Goddard cited Sister Sledge as one of the inspirations for this album), opening with deeply distorted grunts and percolating synth hits from the ARP 2600, an instrument the group used for the first time on In Our Heads, which also at least partially explains the record’s retro sounds. Next drawing from ’90s R&B, Taylor’s falsetto on “Look At Where We Are” fades in and out of a low, slow jam beat, but the self-serious background flutes and violin follow a chord progression that sounds, oddly enough, like Flight of the Conchords’ “The Most Beautiful Girl in the Room”.

Openers “Motion Sickness” and “How Do You Do” are less rooted in Hot Chip’s specific inspirations as they are generally irresistible musical tropes like cowbells, maracas, 4/4 time, pause-and-you’ll-miss-it repetitions of “that thing you do,” etc. The album’s first track sets the play-it-again bar for In Our Heads, counteracting Taylor’s coo with big kick drums and horn-like blasts. “How Do You Do” follows suit, sinking fat bass lines in New Wave lyrics and techno lite. It bounds about like Taylor’s object of affection, whose “voice bouncing like a spring” makes “him want to live again.”

But even the catchiest tropes can become rote, as “Ends of the Earth” proves. In theory, it’s fueled by the same beats that propel the first two-thirds of In Our Heads, but they come off derivative as Taylor whines, “You promised me the ends of the earth/ But I don’t want that.” Even “Always Been Your Love”‘s spoken samples, which in theory aren’t that different from “Night And Day”‘s humorous pseudo-raps, sound forced. Maybe it’s because after Hot Chip’s unfettered declarations of love, post-“Flutes” instrumentation and lyrics– including Goddard’s request to “let me be him” on the track of the same name, which features background vocals too close to Genesis frontman Gabriel’s for comfort, especially with those samples of children laughing– seem to capitulate, to fall back on the risks they just took instead of reaching for new ones. For a band that finally reached that perfect synergy just a few songs earlier, it’s a shame the momentum doesn’t last just another spin around the dance floor.

Essential Tracks: “Flutes”, “Look At Where We Are”, and “How Do You Do”