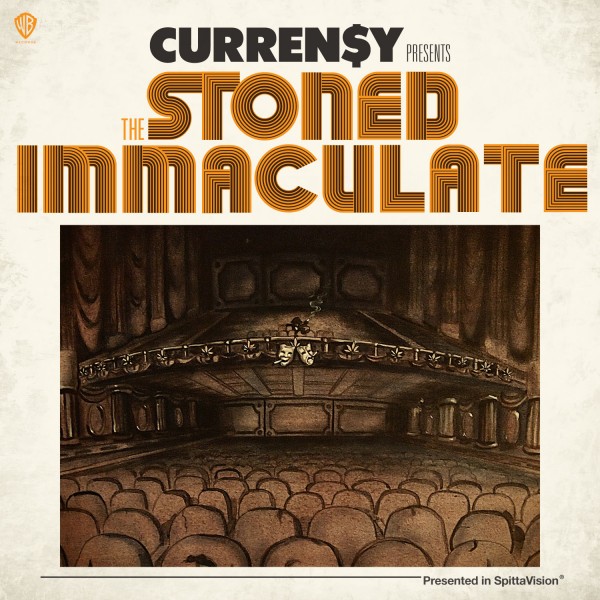 While rap music and delays go hand-in-hand like sandy beaches and mai tai’s, New Orleans’ very own Curren$y is as punctual as he is prolific. After dropping some six records in 2011, he returns with his third effort of 2012, The Stoned Immaculate (his eighth studio LP, and fourth through Warner Bros. in under a year). Despite the intense schedule, this latest LP proves that a rapper can have both quantity and quality, especially oodles of the latter.

Like other Billboard-leaning MC’s, Curren$y is often “stuck” between two essential “speeds”, infectious bangers and more romantic, nostalgic odes; but this LP helps demonstrate variance and unseen skills within those confines to truly set Curren$y apart.

“Sunroof” has arguably this year’s most bonkers beat. It’s this maddening combination of grimy Southern bass, drum machines like assault rifles, and quirky elements of chiptune, specifically retrofied horns ripped from some late ’80s side scroller involving ninja panda bears. The intensity and volume come and go in bursts, pushing and pulling on the listeners’ attention span. Yet amidst the sonic tornado, Curren$y stays perpetually cool and constant, demonstrating a presence few other rappers have. He portrays himself succinctly, your ears wanting to get lost in the sweet noise.

Curren$y further shows an ability to stay in the forefront in the Big K.R.I.T. and Wiz Khalifa-aided “Jet Life”. Khalifa’s sing-talk style and swagger-with-a-side-of-boyish-innocence demand attention. Rather than try to one-up him, though, Curren$y’s dynamic performance neither outshines nor falls flat against his guest’s verses, chugging along perfectly to the beat’s slow, wavy quality. That kind of sacrifice by an MC for the sake of cohesion is ultra rare, yet Curren$y does it with ease.

Curren$y uses “That’s The Thing” to make deeper connections, meaningfully engaging guest star Estelle in the tradition of late ‘90s rap-R&B collaborations (like this one here). There’s an actual conversation going on over the gentle churning of synths, with Curren$y outlining his flawed status as a boyfriend, recognizing his lifestyle doesn’t always meld with monogamy, completely realistic and self-aware as he adds lines like, “I’d respect ya if ya left me, but I’m glad ya never do.” As the “jilted” lover, Estelle’s chorus attempts to do away with the nagging doubts and focus on their lives together, dedicating herself to dealing with it despite the deep sense of pain and frustration under her sensual croon.

Even though Curren$y focuses predominantly on populist hits, he’s still managed to make them transcend their tendencies toward stagnation, as is the case with “No Squares”. It’s your prototypical rap celebration (“No room for squares in the circle of winners”), but even the adventure movie-ready score feels genuine. While winning and getting money is nothing new to rap, lines like “I chase that money down like it said something bout my mamma/ I chase that money down like I think it took my wallet” lend a sense of legitimacy, as if Curren$y’s free to speak openly because he’s not putting on airs. Not only does that help his credibility, but it shows him forging his own ideas about what makes rap truly appealing.

“Chasin’ Papers” transcends to a whole new realm, toeing the line between money-loving banger and touching tale of youth. The subject matter (getting money) is right up the mainstream’s alley; add in Pharrell’s vocoded, quasi-soul-inspired chorus and its appeal magnifies. However, there’s a newfound frankness and vulnerability to his rhymes (“Chasing that paper like it stole something from me/ It did, though/ Friends killed over small bills/ I still go hard, spitting bars for them folk/ Life so fragile/ But the big bucks lay down the road less traveled/ Cause they scared of the hazards, we living for the money, we dying to have it”). It’s subtle, but there’s something profound to his dealings.

In “Chandelier”, Curren$y eschews friends and tremendous production values to tell a story backed by a beat of blended guitars and awkwardly-sampled vocals. It’s a tale of a girl he used to know, who, at the sight of random chandeliers, is taken back to a time when they were together. Though she loved his ballin’ ways, the other girls and the days away left her feeling increasingly despondent, eventually leaving him at the urging of her family to find a more conventionally successful beau. It’s literature put to song, a cohesive, mesmerizing presentation of yearning and abandonment, personal celebration and regret of harmful actions.

Even if Curren$y fell prey to the delays of his fellow MCs, the songs he’s crafted, those brimming with swagger and those overflowing with a sense of earnest realism, would be well worth the wait. Still, we should be really glad he’s yet to leave people hanging.